Wildwood Crest was incorporated as a borough by an act of the New Jersey Legislature on April 6, 1910, from portions of Lower Township. The area of the borough was first developed by Philip Baker in the 1910s as a southern extension to the resort of Wildwood. The borough's name comes from Wildwood, which in turn was named for the area's wild flowers.

It is a dry town, where alcohol cannot be sold, affirmed by the results of a referendum held in 1940. Wildwood Crest joins Cape May Point and Ocean City among municipalities in Cape May restricting the sale of alcohol. Adjoining Wildwood allows the sale of alcohol, including at bars on its boardwalk.

The borough was ranked the second-best beach in New Jersey in the 2008 Top 10 Beaches Contest sponsored by the New Jersey Marine Sciences Consortium. Wildwood Crest is one of five municipalities in the state that offer free public access to oceanfront beaches monitored by lifeguards, joining Atlantic City, North Wildwood, Wildwood and Upper Township's Strathmere section. 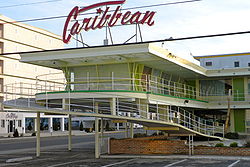 The Caribbean Motel, an architectural landmark of the "Doo Wop" era.

The term "Doo Wop" was coined by the Mid-Atlantic Center For The Arts in the early 1990s to describe the unique, space-age architectural style that was common in the 1950s and 1960s. Post World War II America was an optimistic, confident, and enthusiastic society. The new age style of architecture evolved into a showcase of colorful, flashy, modernistic architecture that captured the spirit of the times; it incorporated modern, sweeping angles, bright colors, starbursts, boomerang shapes, plastic palm trees, and angular wall and roof styles. "Doo Wop" was a celebration of the architecture, design, music, and pop culture of the 1950s and 1960s. During the 1950s, the economy had grown to unprecedented levels. Americans achieved a level of prosperity they had never known before. In response to this unprecedented growth, hundreds of motels were constructed in Wildwood and Wildwood Crest with the distinct "Doo Wop" style of architecture. The first motel to reflect this style was the Ebb Tide Motel, constructed in 1957, which was designed and built by Will and Lou Morey, who specialized in such designs.

Several "Doo Wop" motels, such as the Caribbean Motel, are registered on the National Register of Historic Places. In recent years, historic "Doo Wop" motels have been demolished to make way for the construction of condominiums, leading to organized efforts to preserve the remaining examples.

Part of the borough's beachfront has been closed off for the protection of native birds such as the piping plover. These small birds have this area all to themselves so that their eggs may be protected from beachgoers. There is a nature trail one may take through the dunes to explore this sheltered area of the beach.

Wildwood Crest borders the Diamond Beach section of Lower Township to the south, the City of Wildwood to the north, and the Atlantic Ocean. 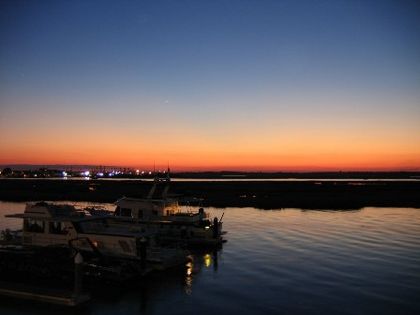 The back bay of Wildwood Crest at sunset. 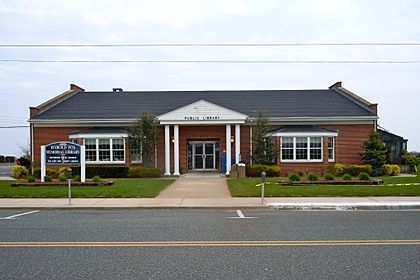 Wildwood Crest and its neighboring towns of Wildwood, North Wildwood, and West Wildwood make up "The Wildwoods" resort, a popular vacation destination for those living in all parts of New Jersey as well as the Philadelphia and New York City metropolitan areas. Many vacationers and tourists have come from as far away as, New England and Canada and have made The Wildwoods a vacation hotspot, due to the area's mild summer climate. Unlike its sister communities of Wildwood and North Wildwood, Wildwood Crest is generally set apart from the all-hours excitement that the resort area is known for. Many vacationers will find some of the quietest and most undisturbed beach space.

In recent years, condominiums have replaced many of the motels the area was known for, such as The Grand, The Ocean Breeze, El Coronado, and The Arcadia. Some restaurants have been torn down and replaced with condominiums, including The Captain's Table, The Surfside, and Duffenetti's. These changes in housing have significantly changed the demographics of this area, from being a more family oriented one-vacation-per-summer place (for the middle class) to being a weekend retreat for wealthier families. 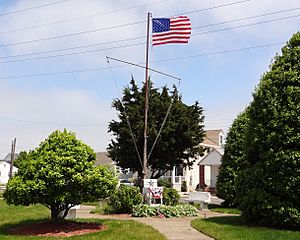 The borough is bordered on the bay side by Sunset Lake. This was once connected to the Atlantic Ocean by Turtle Gut Inlet, which was closed in 1922. The Sunset Lake and Turtle Gut Park is located at New Jersey and Miami Avenues. A nearby memorial commemorates the Battle of Turtle Gut Inlet fought on June 29, 1776. This was the only American Revolutionary War battle fought in Cape May County. 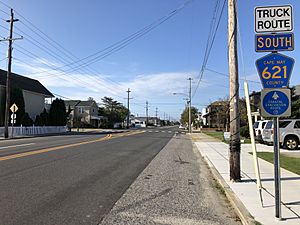 County Route 621 (Pacific Avenue / New Jersey Avenue) runs for 2.0 miles (3.2 km) through the borough, from Lower Township to the south to Wildwood in the north.

Parking in the beach area of Wildwood Crest is regulated by parking meters between mid-May and mid-September.

Portions of the borough—together with areas in North Wildwood, West Wildwood and Wildwood—are part of a joint Urban Enterprise Zone (UEZ), one of 32 zones covering 37 municipalities statewide. The four municipalities in The Wildwoods were selected in 2002 as one of a group of three zones added to participate in the program as part of a joint zone with. In addition to other benefits to encourage employment and investment within the Zone, shoppers can take advantage of a reduced 3.3125% sales tax rate (half of the 6+5⁄8% rate charged statewide) at eligible merchants. Established in September 2002, the borough's Urban Enterprise Zone status expires in December 2023. The joint UEZ is overseen by the Enterprise Zone Development Corporation of the Wildwoods Board, which includes representatives from all four municipalities.

Notable motels in Wildwood Crest include the Caribbean Motel, built in 1957 in the Doo-Wop style and added to the National Register of Historic Places on August 24, 2005. 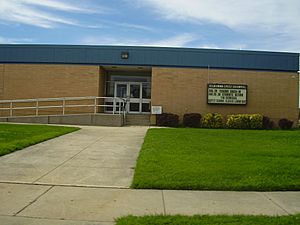 The Wildwood Crest School District serves public school students in pre-kindergarten through eighth grade at Crest Memorial School. As of the 2019–20 school year, the district, comprised of one school, had an enrollment of 275 students and 34.4 classroom teachers (on an FTE basis), for a student–teacher ratio of 8.0:1.

For ninth through twelfth grades, public school students from Wildwood Crest attend Wildwood High School in Wildwood as part of a sending/receiving relationship with the Wildwood Public School District, together with students from North Wildwood and Wildwood Crest. As of the 2019–20 school year, the high school had an enrollment of 245 students and 29.9 classroom teachers (on an FTE basis), for a student–teacher ratio of 8.2:1.

Wildwood Catholic Academy in North Wildwood (prior to 2020 it was two separate schools: Cape Trinity Catholic elementary school and Wildwood Catholic High School) operates under the auspices of the Roman Catholic Diocese of Camden.

People who were born in, residents of, or otherwise closely associated with Wildwood Crest include:

All content from Kiddle encyclopedia articles (including the article images and facts) can be freely used under Attribution-ShareAlike license, unless stated otherwise. Cite this article:
Wildwood Crest, New Jersey Facts for Kids. Kiddle Encyclopedia.