South Dennis is an unincorporated community located within Dennis Township in Cape May County, New Jersey, United States. It is part of the Ocean City Metropolitan Statistical Area. Its postal ZIP Code is 08245. The post office was established in 1873, with Robert Hutchinson as the first postmaster.

As of the 2000 United States Census, there were 93 people and 41 households residing in the ZIP Code Tabulation Area 08245. The population density was 930 people per square mile.

South Dennis lies on the cusp of a humid subtropical climate zone and experiences four discernible seasons. It receives an average of 44.52 inches (1,131 mm) of precipitation each year, with the wettest season being August. In January 1942, South Dennis experienced its lowest recorded temperature at -22 °F, while the hottest temperature was 103 °F in July 1993. 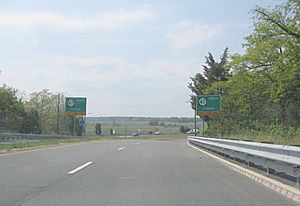 Route 83 westbound as it approaches its terminus at Route 47 in 2005 before the intersection was reconstructed to feature a traffic light. Note the 1950s-era curb.

South Dennis lies at the intersection of Route 47 (known as Delsea Drive) and Route 83. A major infrastructure project that realigned Route 47 and added a traffic light was completed in July 2007 at a cost of $6.7 million. Two county routes, County Route 628 and County Route 657, terminate shortly after entering South Dennis.

People who were born in, residents of, or otherwise closely associated with South Dennis include:

All content from Kiddle encyclopedia articles (including the article images and facts) can be freely used under Attribution-ShareAlike license, unless stated otherwise. Cite this article:
South Dennis, New Jersey Facts for Kids. Kiddle Encyclopedia.