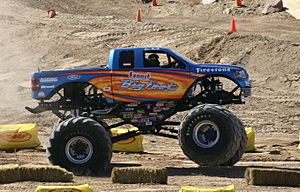 A monster truck is a vehicle usually styled after a pickup truck. It is changed or purposely built with very big wheels and suspension. Monster trucks are used for competition and popular entertainment. 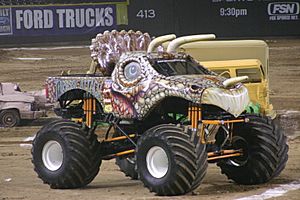 Jurassic Attack, based on a Triceratops

The first monster truck ever built was a pickup truck that was modified with a larger suspension and larger tires. Today, trucks now have custom built tubular chassis, with four-link suspension to provide up to four feet of clearance, and they also now have fiberglass bodies that go onto the chassis separately and are designed to be easily removed and easily replaced when damaged. Mounted just behind the driver on most trucks are the engines, which are typically supercharged, run on a methanol alcohol and corn-based oil fuel, and have displacement of up to 575 cubic inches (9.42 L). Axles are mostly taken from either heavy-duty military trucks or road vehicles such as school buses, and are modified to have a planetary gear reduction at the hub to help turn the tires. All trucks have hydraulic steering in both the front and the rear (four wheel steering), with the front wheels controlled by the steering wheel and the rear wheels by a toggle switch. The tires are typically "Terra" tires used on fertilizer spreaders, and are of size 66"×43"-25", nominally 66" diameter, 43" width, to fit 25" rims (168×109-63 cm). Most trucks utilize a modified and/or custom designed automatic transmission, such as a Turbo 400, Powerglide, Ford C6 transmission, or a Torque-flite 727. A limited number of trucks utilize a Lenco transmission, which traces its roots to drag racing. Most of the automatic transmissions are heavily modified with transbrakes, manual valve bodies, and heavy duty gear sets. Trucks running a Lenco use a centrifugal clutch as opposed to a torque converter, which are used in automatic transmissions. Lenco transmissions are usually found in two-speed or three speed configurations, and are commonly shifted using compressed CO2. 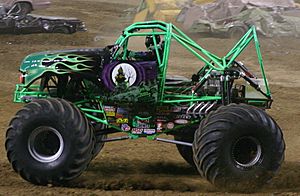 This image of Grave Digger, minus much of its body work, reveals how far removed monster truck designs are from the traditional trucks they somewhat resemble.

The trucks have many safety features, several of which are required just to run in the small arenas that the trucks frequent. Trucks are equipped with three shut-off switches: the RII (Remote Ignition Interrupt), one within the driver's reach in the cab, and another at the rear of the truck so that all electrical power may be shut off in the event of a rollover. Many trucks are constructed with the driver sitting in the center of the cab for visibility. Most cabs are shielded with Lexan (or comparable polycarbonate), which not only protects the driver from track debris, but also allows for increased visibility. Drivers are required to wear firesuits, safety harnesses, helmets, and head and neck restraints. Most moving parts on the truck are also shielded, and high pressure components have restraining straps, both in case of an explosion.

While usually exclusively recreational, monster trucks were used for rescuing people stranded by flooding following August 2017 Hurricane Harvey in Texas, US. The large ground clearance holds the body and engine well above the water level, where an ordinary vehicle would be flooded and immobilized.

All content from Kiddle encyclopedia articles (including the article images and facts) can be freely used under Attribution-ShareAlike license, unless stated otherwise. Cite this article:
Monster truck Facts for Kids. Kiddle Encyclopedia.