Coney Island is a small water park located on the banks of the Ohio River in Cincinnati, Ohio, approximately 10 miles (16 km) east of the downtown area in Anderson Township. It no longer has the old-time carnival rides pictured in many review sites and promotional materials still in use. As of the 2021 season, about one-third of the deep end is occupied by an inflatable obstacle course not pictured on the park's website. The park sits directly adjacent to Riverbend Music Center and Belterra Park. Beginning in 1870, the original owner called the area Parker's Grove, which was later renamed Ohio Grove, The Coney Island of the West after the Ohio Grove Corporation purchased the park in 1886. The name was shortened to Coney Island the following season. Growth over the years spawned dozens of rides and attractions which led to its popularity as an amusement destination.

Coney Island was sold to Taft Broadcasting in 1969 with intentions to move the park to a new, larger destination away from frequent flooding. The new park opened as Kings Island in 1972, although Coney Island's Sunlite Pool remained opened. Rides eventually returned, and additional investments and improvements were made to the Sunlite Pool area. These changes, along with the opening of the nearby Riverbend Music Center in 1984, allowed the park's attendance and profitability to recover. In 2019, Coney Island focused its operations exclusively on its water park amenities and removed other amusement rides.

Coney Island's beginnings date back to 1867 when an apple farmer by the name of James Parker purchased 400 acres (1.6 km2) of land along the shores of the Ohio River. James soon realized in the early 1870s the popularity of the farm's location, and that renting it out was more profitable than his apple orchard. He eventually added a dining hall, dancing hall, and bowling alley. He later sold the land in 1886 for $17,500 to a company called Ohio Grove Corporation headed by two steamboat captains. In time for the opening on June 21, 1886, the name was officially changed to "Ohio Grove, The Coney Island of the West" in an effort to link the park with the famous New York destination. Fortunate enough to be on a riverfront location, riverboat soon became the most popular method of transportation for park visitors. In 1887, "Ohio Grove" was completely dropped from the name as the park became known simply as "Coney Island".

Over the years, the park became a full-fledged amusement park, complete with rides and carnival games. In that capacity, Coney Island was a Cincinnati institution. However, the park's proximity to the river made it prone to frequent flooding. In 1968, park management entered into talks with Taft Broadcasting for the purpose of developing a new park on higher ground. Taft responded by buying Coney Island outright in 1969, and construction began the following year on a new site located in Deerfield Township of Warren County 25 miles (40 km) north of Cincinnati along Interstate 71. Coney Island closed its amusements on September 6, 1971, as most of its rides were moved to the newly completed Kings Island theme park.

After Kings Island opened in 1972, Taft Broadcasting intended to sell Coney Island's land for redevelopment. However, with the company's decision to open another theme park in Virginia (Kings Dominion) and its acquisition of Carowinds on the North Carolina-South Carolina border, the property's redevelopment became a low priority. Less than two years after closing, Coney Island would reopen permanently in 1973. The park was only a shadow of its former self but still featured several popular attractions. The Sunlite Pool — still the largest recirculating swimming pool in the world — was one of those attractions that helped Coney Island remain a popular summertime destination.

The park donated 15 acres (61,000 m2) of land for the construction of Riverbend Music Center which opened in 1984. The land was the former location of the Wildcat and Shooting Star roller coasters. The amphitheater serves as the summer home of the Cincinnati Symphony and Pops Orchestras, as well as a concert venue for other musical acts. In 1991, Coney Island was purchased by Cincinnati businessman Ronald Walker. No longer held back by a corporate entity, management has been able to restore Coney Island as a traditional amusement park with familiar rides such as the "Tilt-A-Whirl", bumper cars, carnival games and musical shows. 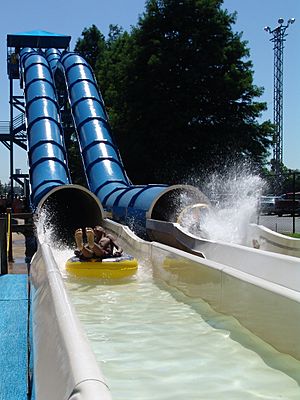 In addition to these flat rides, there are five circular kiddie rides near the front of the park.

Coney Island serves as the location for several festivals, including Summerfair Arts Festival, the "Cincinnati Celtic World Festival", The Appalachian Festival and the Cincinnati Flower and Farm Fest. Concerts are also held in the Moonlite Gardens area of the park, most notably by Over the Rhine.

Scenes from the old children's TV show The Banana Splits were filmed on location at Coney Island.

All content from Kiddle encyclopedia articles (including the article images and facts) can be freely used under Attribution-ShareAlike license, unless stated otherwise. Cite this article:
Coney Island (Cincinnati, Ohio) Facts for Kids. Kiddle Encyclopedia.