Melbourne's Luna Park is a historic amusement park near the beach at St Kilda, Victoria Australia. It was designed and developed by Frederick Ingersoll. It opened in 1912 and has been operating ever since. It is the first of two Luna Parks still operating in Australia; the other is on Sydney Harbour. 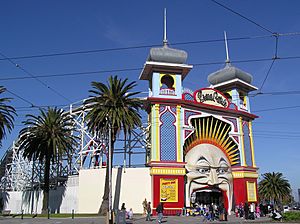 The entrance to Luna Park

All content from Kiddle encyclopedia articles (including the article images and facts) can be freely used under Attribution-ShareAlike license, unless stated otherwise. Cite this article:
Luna Park, Melbourne Facts for Kids. Kiddle Encyclopedia.