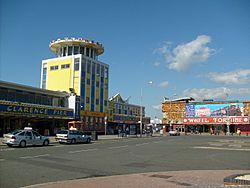 Clarence Pier is an amusement pier in Portsmouth, Hampshire. It is located next to Southsea Hoverport. Unlike most seaside piers in the UK, the pier does not extend very far out to sea and instead goes along the coast.

The pier was originally constructed and opened in 1861 by the Prince and Princess of Wales and boasted a regular ferry service to the Isle of Wight. It was damaged by air raids during World War II and was reopened in its current form on 1 June 1961 after being rebuilt by local architects A.E. Cogswell & Sons and R. Lewis Reynish.

The main entrance to the pier from the road is via a striking pavilion building with distinctive yellow and blue cladding and a small tower. This originally housed an amusement arcade and cafe although in more recent years, the upper floor has variously been used for "Pirate Pete's" indoor children's playground, a Wimpy bar while the 'Golden Horseshoe' amusement arcade and Coffee Cup (originally a prize bingo hall) remain on the ground floor.

A smaller building, perpendicular but not physically joined to the main pavilion houses another amusement arcade, the "Clarence Pier" (Originally called "Wheel Of Fortune") and some small gift shops. The upper floor was originally used as a public house, but it was later converted into 'Jurassic 3001', a futuristic dinosaur-themed dark ride, which opened in 1995. The ride's exterior featured an animatronic triceratops, whose head protruded from the side of the building and roared occasionally at passers-by. The attraction closed in 2001, yet all ride signage and theming on the building remained until the end of 2011. The upper floor space previously occupied by this ride underwent a conversion to apartments, according to planning publications, in 2012.

A building at the side of the funfair houses an arcade called "Games Wharf" and "The Boat House" (originally another Coffee Cup).

The main funfair operates on a free admission, pay-per-ride token-based system. In the early 1980s, the amusement park was named "Fun Acres" and as well as the whole pier itself, it also took up 3500 sq metres of land or so to the north-west of the northern part of the pier. This part of the park was cleared and redeveloped as another arcade called "Southsea Island Leisure", The Clarence Pier Public House, a crazy golf course and a Premier Inn during the 1990s, therefore the park itself is significantly smaller than it used to be. The old part of the park contained the 56-seat Corbiere Spherical Ferris Wheel and a ghost train among other attractions. The token booths were shaped as mushrooms.

The pier viewed from gosport 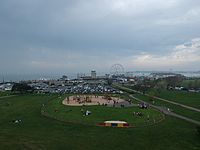 One of the main landmarks of Clarence Pier until the mid-1990s was the Super Loop ride, since removed. The Ferris wheel was sold and relocated to Pleasureland Southport. One ride which lasted the duration was the Skyways roller coaster which was removed in 2018. A new addition to the pier is a pirate-themed crazy golf course situated behind the Clarence Pier arcade.

"Mind the Baby, Mr. Bean", an episode of British TV comedy series "Mr. Bean" was filmed on location at Clarence Pier (as well as other locations in Southsea) and aired on ITV in 1994. This was prior to the closure of the north-western part of the park and the closure of the Wheel Of Fortune public house. The episode shows the Super Loop, Skyways roller coaster, and many of the park's other attractions from that time. Clarence Pier was also the filming location to the teen pop band, "S Club Juniors" song, "Fool No More" filmed mainly on the dodgems but the rollercoaster, 'Skyways' can also be seen in the video.

The Solent Eye Ferris wheel was proposed by Billy Manning Ltd for Clarence Pier in 2007. On 17 October, permission for a 130-foot tall (40 m) wheel was granted, but two days later it was revealed that Portsmouth City Councillors wished the wheel was bigger. As a result, the original plans, which were for a 180-foot tall (55 m) wheel, were revived and conditional planning permission subsequently granted on 19 December 2007. It was expected to cost £2 million. The plans were scrapped because the wheel was too large.

In 2015, a revived plan for a 110 ft wheel was sent. It was approved and opened in Easter 2016. Despite the popularity of the wheel, it was confirmed in September 2016 that the Solent Wheel will be taken down and sent elsewhere, which was later revealed to be Ireland. In March 2017, Clarence Pier's website was updated to say that the wheel would return in 2018, which it did. The wheel returned for the 2019 and 2020 seasons, until it was confirmed on August 27th, 2020 that the wheel will not return for the 2021 season, and will close for the final time on the 27th of September.

All content from Kiddle encyclopedia articles (including the article images and facts) can be freely used under Attribution-ShareAlike license, unless stated otherwise. Cite this article:
Clarence Pier Facts for Kids. Kiddle Encyclopedia.