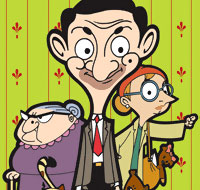 Mr. Bean in the animation along with his landlady Mrs. Wicket, at left and his girlfriend, Irma Gobb

Mr. Bean is a British comedy television series. It is made up of fourteen 25-minute episodes. All of them were written by and star Rowan Atkinson as the main character. Different episodes were also written by Robin Driscoll, Richard Curtis and one by Ben Elton. The first episode was shown on ITV on 1 January 1990. The last television episode, "Goodnight Mr. Bean" broadcast on 31 October 1995. The final episode, "Hair by Mr. Bean of London", was a video released on 15 November 1995, but not shown in the United Kingdom until 2006. 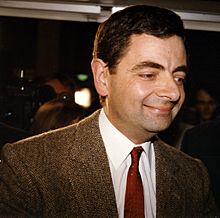 The title character and main protagonist, played by Rowan Atkinson, is a childish buffoon who brings various unusual schemes and contrivances to everyday tasks. He lives alone at the address of Flat 2, 12 Arbour Road, Highbury and is almost always seen in his trademark tweed jacket and a skinny red tie. He also usually wears a digital calculator watch. Mr. Bean rarely speaks, and when he does, it is generally only a few mumbled words which are in a comically low-pitched voice. His first name (he names himself "Bean" to others) and profession, if any, are never mentioned. In the first film adaptation, "Mr." appears on his passport in the "first name" field and he is shown employed as a guard at London's National Gallery.

Mr. Bean often seems unaware of basic aspects of the way the world works, and the programme usually features his attempts at what would normally be considered simple activities, such as going swimming, using a television set, interior decorating or going to church. The humour largely comes from his original (and often absurd) solutions to problems and his total disregard for others when solving them, his pettiness and occasional malevolence.

In the beginning of episode two, Mr. Bean falls from the sky in a beam of light accompanied by a choir singing Ecce homo qui est faba ("Behold the man who is a bean") which was sung by the Southwark Cathedral choir in 1990. The opening sequence was initially in black and white in episodes two and three, which was intended by the producers to show his status as an "ordinary man cast into the spotlight". However, later episodes showed Mr. Bean dropping from the night sky in a deserted London street against the backdrop of St Paul's Cathedral. At the end of episodes two and six, he is also shown being sucked right back up into the sky in the respective background scenes (black scene in episode 3 and street scene in episode 6). Regarding the opening credits, Atkinson has acknowledged that Bean "has a slightly alien aspect to him". In the Mr. Bean: The Animated Series episode "Double Trouble", the alien aspect of him was used in a storyline in which he is taken inside a spacecraft with aliens who look exactly like him and even have their own plushy toys. In an obvious homage towards the end, the aliens send him back home in a beam of light and music similar to the opening of the original Mr. Bean series. Whether Bean is an extraterrestrial is not made clear.

Mr. Bean's long-suffering girlfriend, Irma Gobb (played by Matilda Ziegler), appears in three episodes. In "The Curse of Mr. Bean" and "Mr. Bean Goes to Town", the character is simply credited as "the girlfriend". She is treated relatively inconsiderately by Bean, who appears to regard her more as a friend and companion rather than as a love interest. However, he does become jealous when she dances with another man at a disco in "Mr. Bean Goes to Town" and she certainly expects him to propose to her on Christmas Day in "Merry Christmas, Mr. Bean"; with his failure to do so resulting in her leaving him for good. Despite this, she reappears in Mr. Bean: The Animated Series. It is revealed in the book Mr. Bean's Diary that Bean met Irma Gobb at a local library. Ziegler has also played a waitress, a mother and a policewoman.

In the Comic Relief sketch "Torvill & Bean", Bean is accompanied by a female companion portrayed by Sophie Thompson whose overall appearance resembles Gobb's.

Teddy is Mr. Bean's teddy bear and apparently best friend. The little brown bear is a knitted oddity with button eyes and sausage-shaped limbs which invariably end up broken in half or in various other states of destruction and disfiguration. Although Teddy is inanimate, Mr. Bean often pretends it is alive. For example, when Mr. Bean hypnotizes Teddy, he snaps his fingers and the bear's head falls backwards as if it had fallen asleep instantly (Bean used his finger to prop Teddy's head up). Mr. Bean behaves as if the bear is real, buying it a Christmas present or trying not to wake it in the mornings. The bear is often privy to Mr. Bean's various schemes and doubles as a tool or other items in emergencies; it has been decapitated ("Mr. Bean in Room 426"), used as his paint brush ("Do-It-Yourself Mr. Bean") and shrunk in the wash ("Tee Off, Mr. Bean"). Teddy is also Mr. Bean's "pet" in "Hair by Mr. Bean of London" where he is used to win a pet show.

Over the years, Teddy has undergone several changes. When it debuted on "The Trouble with Mr. Bean", it had a smaller head. Two episodes later, its head reached its current size but its "eyes" were not present until Bean placed gold thumb tacks on its face. The "eyes" have since been replaced with two small white buttons sewn over Teddy's face, giving it a distinctive image.

After filming ended, Teddy was donated by Atkinson to Gyles Brandreth's Teddy bear museum in Stratford-upon-Avon. In 2008 upon the museum's closing, Teddy was sold at auction for £180. 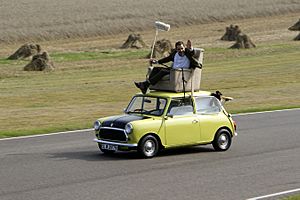 Rowan Atkinson re-enacting a famous scene from the episode "Do-It-Yourself Mr. Bean" on a Mini at Goodwood Circuit Revival 2009 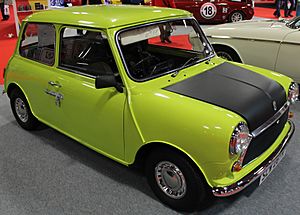 Mr. Bean's vehicle, a citron-green 1977 British Leyland Mini 1000 Mark 4 with a matte black bonnet, was central to several antics such as Bean getting dressed in it, driving while sitting in an armchair strapped to the roof or attempting to avoid a car park fee by driving out through the entrance. In the pilot, the vehicle was originally an orange 1969 BMC Morris Mini 1000 Mark 2 (registration RNT 996H), but this was destroyed in an off-screen crash at the end of the episode. Throughout the sitcom, Bean keeps it locked with a bolt-latch and padlock rather than the lock fitted to the car, which formed a running joke in several episodes; in two episodes, he demonstrated an additional and innovative security measure in that he removes the steering wheel instead of the key which in one episode deterred a car thief. In "Back to School Mr. Bean", Bean's Mini is crushed by a tank as part of a demonstration after he replaced an identical Mini (registration ACW 497V) meant for the demonstration with his own to secure a parking space. After losing it, he removes his padlock and bolt-latch from the remains. Although the Mini has been crushed, it nonetheless reappears in subsequent episodes with the same colours and registration number (SLW 287R) as the car that has been crushed.

There were three Minis painted green and black used in the series, as well as two others painted with the same colour scheme but with no engine that got crushed by the tank. One of the main cars was also crushed by the tank. During filming many parts were swapped from car to car throughout production, including bonnets, wheel trims, grilles, steering wheels, rear lights, occasionally the drivers door and the seat covers.

After filming ended, one of the original Minis was sold to Kariker Kars to be hired for various events whereupon it was temporarily displayed as a major attraction at the Rover Group's museum. In 1997, it was purchased by the Cars of the Stars Motor Museum and displayed for a number of years, later being sold on to a museum in the United States. The main Mini is privately owned and nearing the end of a restoration in the south of England.

To promote Mr. Bean: The Animated Series, a replica of the Mini with the registration number DRW 221T was used. This Mini is currently on display at the National Motor Museum, Beaulieu. The London Motor Museum also has a replica on display.

The Mini was going to appear in the first film adaptation of the series under the registration C607 EUW. In the film, Mr. Bean drives his Mini through Harrods in order to avoid a traffic jam. Although the sequence was filmed, it was not included in the final cut. In June 2018, the Mini from the film was sold for USD 70.000. The Mini eventually had its debut on the big screen when it featured in the film Mr. Bean's Holiday under the registration YGL 572T. Differently to the Minis before (which use the colour Austin Citron green) this Mini is painted in 'Nissan Amarillo Yellow'. The film also featured a second version of the Mini with exactly the same colour scheme but with left-hand drive, driven by the female character Sabine.

The Mini reappears in Mr. Bean: The Animated Series under the registration STE 952R. In 2015, Mr. Bean returned in a sketch for Comic Relief (set at a funeral) in which he drives his Mini to attend it. This Mini bore the same registration as the one in the animated spin-off.

Since the pilot episode, Mr. Bean has a long-running feud with the unseen driver of a light-blue 1972 Reliant Regal Supervan III (registration GRA 26K) to which it would usually get turned over, crashed out of its parking space and so forth by Bean in his Mini, who is usually oblivious to the results. These mishaps became a running gag throughout the series. In "Tee Off, Mr. Bean", Bean is hitchhiking and the Reliant pulls over for him but Bean, who recognizes the car, pretends to not see it until it leaves.

The Reliant reappears in Mr. Bean: The Animated Series under the registration 'DUW 742', again victimized by Mr. Bean in his Mini. In the episode "Young Bean", the identity of the Reliant driver is revealed for the first time (albeit shown in a flashback as a child). In the episode "Car Wars", the driver becomes fed up with years of abuse by Bean and finally decides to get his payback on Bean.

All content from Kiddle encyclopedia articles (including the article images and facts) can be freely used under Attribution-ShareAlike license, unless stated otherwise. Cite this article:
Mr. Bean Facts for Kids. Kiddle Encyclopedia.