Canobie Lake Park is an amusement park in Salem, New Hampshire, located about 31 miles (50 km) north of Boston. It was founded as a trolley park on the shore of Canobie Lake on 1902. Three local families currently run the park, which draws visitors from throughout the New England region. Canobie Lake Park's age and history inspired author Stephen King to use rides and elements from the park in his Joyland novel. It is one of only thirteen trolley parks still operating in the United States as of 2020.

The park originally featured botanical gardens, with few amusement rides. After the automobile became the most popular mode of travel in the United States, the trolley line serving the park was closed. Attendance in the park declined until it was purchased by Patrick J. Holland. He installed a wooden roller coaster named Yankee Cannonball in 1936, a ride which was designated as an ACE Roller Coaster Landmark by American Coaster Enthusiasts in 2013. The park recovered, and the Arrow Development designed Canobie Corkscrew was installed in 1987, after being relocated from the Old Chicago amusement park in Illinois, where it was named the Chicago Loop. Untamed, a Euro-Fighter coaster, is the only other coaster in the park besides the Corkscrew with an inversion. 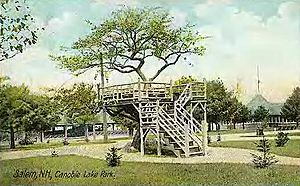 A postcard of an apple tree in Canobie Lake Park.

Canobie Lake Park opened on August 23, 1902 as a trolley park for the Massachusetts Northeast Street Railway Company. The amusement park has opened every summer since then. In its early years, the park was known for its flower gardens, promenades and gentle attractions. After the decline of trolley as a mode of travel, the park declined in popularity, culminating in the park's closure on St. Patrick's Day in 1929. In 1931, the park was auctioned off with the intent to subdivide the land into residential lots. Patrick J. Holland, a construction contractor from Ireland, bought the property for US$17,000. He and his workers restored the park with new gardens, attractions, and modern electricity. In 1932, the park reopened, three years after its initial closure. Its popularity recovered, and the Yankee Cannonball was installed, becoming one of the park's most popular attractions for decades. Holland died in 1943, leaving the park with his wife and son, who continued to own the park until 1958. The park is now owned by three families, who purchased the park afterward.

Some films and novels have used Canobie Lake Park as a setting or filming location. Stephen King, an American author of horror novels, based the amusement park in his novel Joyland on Canobie Lake Park. A resident of the nearby state of Maine, King visited after searching for a park "that was nice and clean and sunlit, but wasn't too big". During a visit in 2012, King took photographs inside the dark ride attraction, "Mine of Lost Souls", because he wanted to incorporate a haunted dark ride into his novel. The park was also used as a filming location for the 2013 film Labor Day, based on the novel of the same name by Joyce Maynard. It also appeared in the reality TV Show Fetch! with Ruff Ruffman as well as in the season 6 intro to the TV Show Zoom. 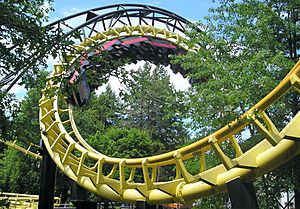 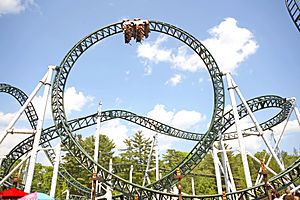 Canobie Lake Park features a variety of rides and attractions. The Yankee Cannonball, a 1930s-era wooden roller coaster, is one of the park's best known rides. The park also has a looping, steel roller coaster named the Canobie Corkscrew, designed by Arrow Dynamics. Originally manufactured in 1975, the Canobie Corkscrew operated at Old Chicago from 1975 to 1980 as the "Chicago Loop", at the Alabama State Fairgrounds as "Corkscrew" from 1982 to 1986, before moving to Canobie Lake in 1987. The Canobie Corkscrew is one of the first steel looping roller coasters manufactured in the world and is part of a series of Arrow corkscrew models produced from 1975 to 1979.

Other thrill rides in Canobie Lake Park include Starblaster, an S&S Double Shot, which replaced a ride called the Moon Orbiter in 2002. The park also features a rotor ride named "Turkish Twist", and a shoot-the-chutes ride named "The Boston Tea Party". The park has one dark ride, "The Mine Of Lost Souls". Passengers board mine cars, and venture into the depths of a haunted mine. Another flat ride at the park is the "Psychodrome", a scrambler ride located in a dome, with lighting, music and special effects. In 2005, the park opened Castaway Island, a small water park consisting of a water play structure. In October 2017, the park announced an expansion to the water ride complex, including a lazy river and a series of water slides.

The park once had a simulator ride named "USA Missile", built early in the Space Age by John Taggart and Sam Daugherty. Passengers sit facing the nose of the rocket, which is then inclined. A movie is shown on a screen at the front as a simulation of space flight. While at Canobie Lake Park, it was repainted to mimic the markings used on such launch vehicles as the Saturn rockets.

In 2011, the park added Untamed, a Gerstlauer Euro-Fighter 320+ model. This is the fourth Euro-Fighter to be added in the United States, the only one in the Northeast, and the first roller coaster to be opened in Canobie Lake Park since the Canobie Corkscrew in 1987. The following year, park added Equinox, a ride that lifted and spun riders on a giant mechanical arm. Despite the ride's popularity, it was shut down in 2014 after persistent mechanical problems left the ride operating "sporadically". The park has stated that safety was not an issue.

Canobie Lake Park holds many events in the park throughout the year, including live performances and fireworks shows. The park has multiple venues for live entertainment, including the Country Stage, Midway Stage, and Dancehall Theater. The park's Dancehall Theater has hosted performers such as Duke Ellington, Sonny & Cher, Frank Sinatra, and Ella Fitzgerald. The Canobie Ramblers occasionally perform at the Log Flume Gazebo. On certain weekends in September and October, Canobie Lake Park holds ScrEEEmfest, a Halloween event run in the afternoon that features Canobie's most popular rides plus five walk-through haunted attractions. Past "haunts" have included Merriment Incorporated, The Dead Shed, Black Hollow Cove, Head Hunters at Cannibal Lake, Cannibal Island, Demons of Darkness, and Virus. The park hosts performances from impersonators of various celebrities, such as Michael Jackson and Tim McGraw.

All content from Kiddle encyclopedia articles (including the article images and facts) can be freely used under Attribution-ShareAlike license, unless stated otherwise. Cite this article:
Canobie Lake Park Facts for Kids. Kiddle Encyclopedia.