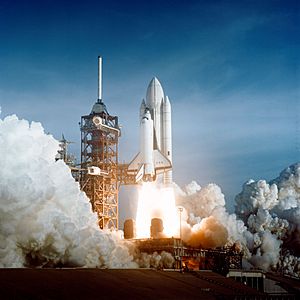 The Space Shuttle lifts off on a crewed mission to space.

The Space Age is the time period in human history related to the space race, space exploration, and space technology. Most people say this started when Sputnik 1 was launched in 1957, and continues to today. This has influenced culture such as in movies, television, music, art, and architecture.

All content from Kiddle encyclopedia articles (including the article images and facts) can be freely used under Attribution-ShareAlike license, unless stated otherwise. Cite this article:
Space Age Facts for Kids. Kiddle Encyclopedia.