James Arthur Lovell Jr. (born March 25, 1928) is a former NASA astronaut, Naval Aviator, and retired Navy captain. Lovell is known for being the commander of the ill-fated Apollo 13 mission, which suffered a critical failure en route to the Moon but was brought back safely to Earth through the efforts of the crew and mission control. In addition to being part of the Apollo 13 crew, Lovell was the command module pilot of Apollo 8, the first Apollo mission to enter lunar orbit.

He is a recipient of the Congressional Space Medal of Honor and the Presidential Medal of Freedom (in 1970, one of 17 recipients in the group Space Exploration). 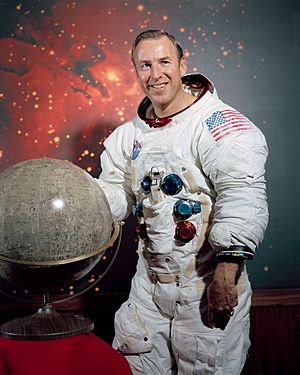 Born in 1928 in Cleveland, Ohio, James Lovell was the only child of his mother Blanche, who was of Czech descent, and his father, a coal furnace salesman. After relocating to Milwaukee, Wisconsin, he graduated from Juneau High School. A member of the Boy Scouts during his childhood, Lovell eventually achieved Eagle Scout, the organization's highest level.

Lovell became interested in rocketry and built flying models as a boy. After graduating from high school, he attended the University of Wisconsin–Madison for two years under the "Flying Midshipman" program from 1946 to 1948. While at Madison, he played football and pledged to the Alpha Phi Omega fraternity.

Lovell applied and was accepted to the United States Naval Academy in the fall of 1948. During his first year he wrote a treatise on the liquid-fueled rocket engine. He attended Annapolis for the full four years, graduating as an ensign in the spring of 1952 with a B.S. degree. He then went to flight training at NAS Pensacola from October 1952 to February 1954. 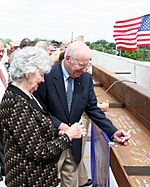 Lovell and his wife Marilyn in 2009

In 1952, following his graduation from the Naval Academy, Lovell married his high school sweetheart, Marilyn Lillie Gerlach (born July 11, 1930), the daughter of Lillie (née Nordrum) and Carl Gerlach. The two were high-school sweethearts at Juneau High School in Milwaukee. While she was a college student, Gerlach transferred from Wisconsin State Teachers College to George Washington University in Washington D.C. so she could be near him while he was training in Annapolis.

The couple have four children. The 1995 film Apollo 13 portrayed the family's home life during the Apollo 13 mission of 1970 with actress Kathleen Quinlan being nominated for a supporting actress Oscar for her performance as Marilyn Lovell.

In 1999 the Lovell family opened "Lovell's of Lake Forest", a fine dining restaurant in Lake Forest, Illinois. The restaurant displayed many artifacts from Lovell's time with NASA, as well as from the filming of Apollo 13. Before the restaurant was sold in 2006 to son James ("Jay"), he worked as executive chef. The restaurant was put on the market for sale in February 2014 and closed in April 2015, with the property auctioned the same month.

All content from Kiddle encyclopedia articles (including the article images and facts) can be freely used under Attribution-ShareAlike license, unless stated otherwise. Cite this article:
Jim Lovell Facts for Kids. Kiddle Encyclopedia.