Goochland County is a county located in the Commonwealth of Virginia. As of the 2010 census, the population was 21,717. Its county seat is Goochland.

Goochland County is included in the Greater Richmond Region 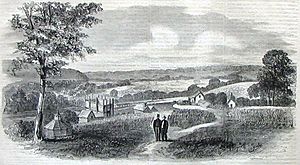 Native Americans had lived along the waterways for several thousand years. Siouan-speaking tribes were the ones encountered by English colonists. Their numbers were sharply reduced by European infectious diseases to which they had no immunity, which caused widespread social disruption.

In 1634, the colonial government organized the territory of Virginia into eight shires, to be governed as shires in England. Henrico was one of these shires.

Goochland was founded in 1728 as the first county formed from Henrico shire, followed by Chesterfield County in 1749. Goochland originally included all of the land from Tuckahoe Creek, on both sides of the James River, west as far as the Blue Ridge Mountains.

Goochland was named for Sir William Gooch, 1st Baronet, the royal lieutenant governor from 1727 to 1749, at which time the nominal governor, the Earl of Albemarle, remained in England. As acting royal governor, Gooch promoted settlement of the Virginia backcountry as a means to insulate the Virginia colony from Native American and New France settlements in the Ohio Country

As the colonists moved into the Piedmont west of Richmond, they first developed tobacco plantations like those of the Tidewater. After the Revolution, tobacco did not yield as high profits. In Goochland, as in other areas of Virginia, many planters switched to growing wheat and mixed crops.

The first court was held in May 1728. The exact location of this first court is unknown, but researchers believe that the first courthouse was constructed in old Goochland County between 1730 and 1737, perhaps at Scottsville—an old county seat which straddles three counties today. When the vast county was divided in 1744, old Albemarle County retained the original county seat. The location of second Goochland County courthouse had to be moved east. Then once more in the early-19th century the courthouse was moved to its current location along Rt. 6 in central Goochland. The Goochland County Court Square was listed on the National Register of Historic Places in 1970.

During the early part of 1781, Lord Cornwallis marched his sizable army through the boundaries of Goochland. They occupied and thoroughly destroyed Elkhill, a small estate of Thomas Jefferson, slaughtering the livestock for food, burning barns and fences, and finally burning down the house. They took 27 slaves as prisoners of war, and 24 died of disease in the camp.

One point along the James River came to be known as Cornwallis Hill. It is said that the British General, who paused here on his way to Yorktown, remarked that this spot with its magnificent vista of the James River Valley would make an ideal site for a house.

General Lafayette returned to visit Virginia during his grand tour of the United States in 1824 and 1825. On November 2, 1824, General Lafayette "left Richmond on his way to Monticello to visit Mr. Jefferson." On the way, Gen. Lafayette stopped at Powell's Tavern in Goochland. ("I spent some time at the Tavern and there was much celebration at his arrival.") While there, the general met with American officers and many citizens of the county.

Almost 100 years after Cornwallis marched his army through Goochland, the county was the site of another battle. By the year 1864, the young Union Colonel Ulric Dahlgren was an officer. He had a plan to infiltrate central Virginia, break out nearly 12,000 Union prisoners on Belle Isle in Richmond, the Confederate capital, and destroy the city. On March 1, 1864, Dahlgren's forces reached Sabot Hill, Dover, and Eastwood in eastern Goochland.

Eastwood was then occupied by Plumer Hobson and his wife, the daughter of Brigadier General Henry A. Wise. On the previous night General Wise had arrived at Eastwood. When a Union detail arrived at Eastwood looking for him, his daughter said that he was in Charleston, South Carolina. Instead, he was riding rapidly southeast to Richmond to warn the troops of the Union raiders. Dahlgren went to Sabot Hill, the home of James Seddon and his wife, who answered the door and invited the officer in for some wine and Southern hospitality. She knew that Wise was on his way to Richmond and wanted to delay Dahlgren. Ultimately, due to the quick thinking by the families in Goochland, Wise was able to warn forces in Richmond and defeat Dahlgren's raid.

When the war broke out, James Pleasants, a native of the county, insisted he replace his uncle in the Goochland Light Dragoons (known during the war as Co. F, 4th Virginia Cavalry). In 1861, he was allowed to take his uncle's place. In the winter of 1864, any troops who were close to home were allowed to return to recruit more soldiers. On Pleasants' first night home, Dahlgren's raiders stole his horses but did not search the property. When Pleasants found out what happened, he grabbed his carbine and started off on foot after the raiders. Hearing a noise, he hid in the woods, and then ordered the Union cavalryman to surrender. Pleasants mounted the man's horse, and forced the soldier to walk in front of him to search for more soldiers. Within a short amount of time, Pleasants had captured several Union prisoners and took them as prisoners back to Bowles' store. In all, he captured 15 Union soldiers, recovered 16 horses, and shot one officer who refused to surrender to him.

Sponsored by the Daughters of the Confederacy, a monument to the Confederate effort was erected on the Goochland Courthouse green. It was unveiled on June 22, 1918. Among those in attendance was Robert E. Lee, grandson of General Robert E. Lee.

In St. James Northam Parish there were three early churches: Dover Episcopal, Beaverdam Episcopal, and Lickinghole Episcopal. Dover was the first, being built in 1724, and it closed sometime after the Revolutionary War. Its location and closing date are unknown. Beaverdam was located near what is now Whitehall Road, but its exact location is also unknown.

One notable church is Byrd Presbyterian Church. The congregation has some members descended from worshipers organized by Samuel Davies, a theologian and future Princeton University president, at Tucker Woodson's farm in 1748. By 1759 the group had its own building on Byrd Creek. In 1838 descendants of the original congregation began worshiping here when the existing structure was built. Byrd Presbyterian is a notable example of the simple brick churches constructed in Virginia during the 19th century. The building retains some of its original architectural features, including its slate roof and interior window valances, as well as its cemetery.

Portions of the historic Three Chopt Trail, a Native American trail, run through a large portion of the county. The trail was marked by three hatchet chops in trees to show the way. The modern-day U.S. Route 250 roughly follows this route from Richmond to Charlottesville.

Other historic homes and mansions in Goochland can be found through the Goochland County Historical Society (see links below).

In 1973, Wayne Corporation of Richmond, Indiana introduced a safer design in school bus construction, the Lifeguard. Shortly afterward, the manufacturer held a nationwide contest to gain ideas to improve school bus safety, with the grand prize to be the award of a new Lifeguard school bus. Pearl P. Randolph, a member of the Goochland County School Board, created the winning entry.

As a result, the Goochland County Public Schools received the new school bus. Her idea was to install sound baffles in the ceilings of school bus bodies to help reduce driver distraction. Compact forms of such equipment were later developed in the 1980s by Wayne and other bus manufacturers when diesel engines (and their greater noise) became commonplace.

All content from Kiddle encyclopedia articles (including the article images and facts) can be freely used under Attribution-ShareAlike license, unless stated otherwise. Cite this article:
Goochland County, Virginia Facts for Kids. Kiddle Encyclopedia.