Louisa County is a county located in the Commonwealth of Virginia. As of the 2010 census, the population was 33,153. The county seat is Louisa.

Prior to colonial settlement, the area comprising Louisa County was occupied by several indigenous peoples including the Tutelo, the Monacan, and the Manahoac peoples, who eventually fled to join the Cayuga Iroquois (Haudenosaunee) people in New York state under pressure from English settlers. Louisa County was established in 1742 from Hanover County. The county is named for Princess Louise of Great Britain, youngest daughter of King George II, and wife of King Frederick V of Denmark. Patrick Henry lived for some time in Louisa County on Roundabout Creek in 1764. Henry was being mentored at that time by the Louisa County magnate Thomas Johnson the representative of Louisa County in the House of Burgesses. In 1765, Patrick Henry won his first election to represent Louisa County in the House of Burgesses. At the end of the eighteenth century and in the early nineteenth century, numerous free mixed-race families migrated together from here to Kentucky, where neighbors began to identify them as Melungeon.

The Virginia Central Railroad was completed through Louisa County in 1838–1840. During the Civil War, it was an important supply line for the Confederate armies. As a result, several significant cavalry actions took place in the county, particularly one fought at Trevilians in 1864. 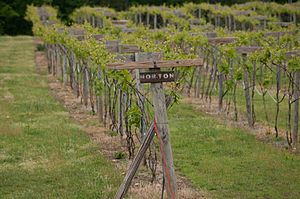 Cooper Vineyards in Louisa is the first winery on the East Coast and the second in the country to be awarded the fourth and highest, Platinum certification by Leadership in Energy and Environmental Design (LEED)

The Twin Oaks Community is one of the country's oldest secular communes, established by its first eight members in 1967. This was part of a national movement among numerous young people to "get back to the land" and live in more simple ways based in community. Louisa is also home to the Acorn Community, a rural, cooperative, income sharing community on about 80 acres, founded in 1993 by one of the founding members of Twin Oaks, Kat Kincade. Another newly forming community as of 2011 is the Living Energy Farm, a 'neo-Amish' farm, where no fossil fuels will be used but new technologies such as solar will be embraced. Louisa is becoming a hub of cooperative rural communities.

Lake Anna, a 13,000-acre (53 km2) artificial lake, and the associated North Anna Nuclear Generating Station were built by Virginia Power in the 1970s. In recent years the predominantly rural county has grown because of retirees' settling near Lake Anna, and because of its convenient location for commuters. It is an hour's drive or less from Richmond, Fredericksburg and Charlottesville.

The U.S. Geological Survey reported that a magnitude 5.8 earthquake hit Virginia on Tuesday, August 23, 2011 at 1:51 PM EST. The quake occurred at an approximate depth of 3.7 miles and was centered in Louisa County (location at 37.944°N, 77.942°W), 5 miles SSW of Mineral and 38 miles NW of Richmond. According to Associated Press, "Shaking was felt at the White House and all over the East Coast, as far south as Charleston, S.C. Parts of the Pentagon, White House and Capitol were evacuated." It was also felt in parts of Canada.

Although the county's 2008 population is only 31,000, it is one of the fastest-growing in Virginia, as people have moved near Lake Anna. At least 15 new housing developments have sprouted in five years. 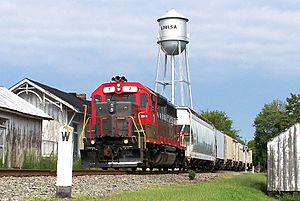 A local train of the Buckingham Branch railroad passes the C&O Depot and water tower in Louisa.

Historical places and points of interest

All content from Kiddle encyclopedia articles (including the article images and facts) can be freely used under Attribution-ShareAlike license, unless stated otherwise. Cite this article:
Louisa County, Virginia Facts for Kids. Kiddle Encyclopedia.