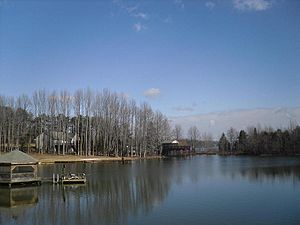 In 1829 gold was discovered in Louisa county. In the 1880s gold mining reached its peak. The Goodman gold mine is the site that later became Lake Anna. The reservoir is formed by the North Anna Dam on the North Anna River at 38°00′47″N 77°42′46″W﻿ / ﻿38.01306°N 77.71278°W﻿ / 38.01306; -77.71278﻿ (North Anna Dam). In 1968, Virginia Electric and Power Company (now Dominion) purchased 18,000 acres (73 km²) of farmlands in three counties along the North Anna and Pamunkey Rivers. They planned to provide clean, fresh water to cool the nuclear power generating plants at the North Anna Nuclear Generating Station next to the lake. By 1972 the lake bottom was cleared of all trees and the dam was almost finished. It was thought it would take three years to completely fill the lake. But with the additional rainfall from Hurricane Agnes, the lake was full in only 18 months. The first communities were started at about that same time. Now there are about 120 different communities on the shores of the lake. In March 1986, construction on the dam's 1 megawatt hydroelectric power plant began. The two generators went into commercial operation in December 1987.

Plans for an addition of a third reactor have raised protests from environmentalists and property owners. They fear it will increase in the water temperature and lower the water level, particularly on the private side. According to Dominion, the water discharged from the plant is usually about 14 degrees F warmer than the intake water. 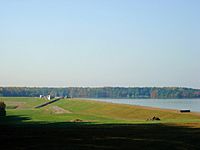 Lake Anna is one of the finest Largemouth bass fishing lakes in Virginia. Besides largemouth, there are striped bass, crappie, channel catfish, walleye and several species of sunfish. Because of the warm water and low Oxygen saturation the striped bass have to be stocked in Lake Anna. The walleye population has a similar problem and must also be stocked. Lake Anna has very good numbers of channel catfish, with many averaging 3 pounds. Because of the warm waters, Lake Anna can be fished all year long. It is a very popular recreational lake that offers boating, Water skiing and Jet Skiing. As a result, Lake Anna gets very crowded. Fishermen resort to early morning and late night fishing when all the other users are off the lake.

All content from Kiddle encyclopedia articles (including the article images and facts) can be freely used under Attribution-ShareAlike license, unless stated otherwise. Cite this article:
Lake Anna Facts for Kids. Kiddle Encyclopedia.