Albemarle County is a county located in the Piedmont region of the Commonwealth of Virginia. Its county seat is Charlottesville, which is an independent city and enclave entirely surrounded by the county. Albemarle County is part of the Charlottesville Metropolitan Statistical Area. As of the 2010 census, the population was 98,970; in 2020, it was estimated at 112,395. 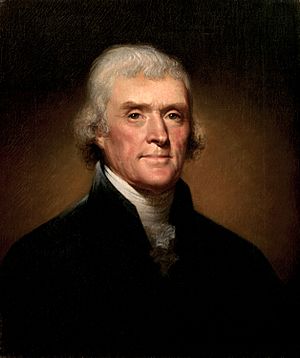 Thomas Jefferson lived most of his life in Albemarle County

At the time of European encounter, the inhabitants of the area that became Albemarle County were a Siouan-speaking tribe called the Saponi. In 1744, the Virginia General Assembly created Albemarle County from the western portion of Goochland County. The county was named in honor of Willem Anne van Keppel, 2nd Earl of Albemarle and titular Governor of Virginia at the time. The large county was partitioned in 1761, forming Buckingham and Amherst counties, at which time the county seat was moved from the formerly central Scottsville to a piece of newly central land, christened Charlottesville. In 1777, Albemarle County was divided and Fluvanna County established, finalizing the boundaries of modern Albemarle County.

Albemarle County is well known for its association with President and Founding Father Thomas Jefferson, who was born in the County at Shadwell, though it was then part of Goochland County. However, his home of Monticello is located in the County.

Albemarle's western border with Augusta and Rockingham Counties is located within the Shenandoah National Park.

Albemarle County borders 8 other counties, more than any other county in Virginia.

22% of Albemarle residents have a graduate or professional degree, compared with 10% nationwide.

The city of Charlottesville is enclaved within Albemarle County. Under Virginia law in effect since 1871, all municipalities in the state incorporated as cities are legally and politically independent of any county.

There is only one incorporated town in Albemarle County:

Many private schools in Albemarle serve the county and students from surrounding areas. These include:

Some students attend several private schools in the City of Charlottesville.

Jefferson-Madison Regional Library is the regional library system that provides services to the citizens of Albemarle.

All content from Kiddle encyclopedia articles (including the article images and facts) can be freely used under Attribution-ShareAlike license, unless stated otherwise. Cite this article:
Albemarle County, Virginia Facts for Kids. Kiddle Encyclopedia.