Greene County is a county in Virginia in the eastern United States. As of the 2010 census, the population was 18,403. Its county seat is Stanardsville. 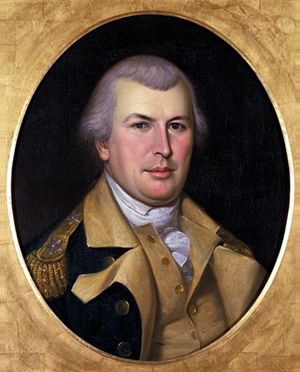 Nathanael Greene, for whom the county was named

Greene County was established in 1838 from Orange County. The county is named for American Revolutionary War hero Nathanael Greene.

A major incident occurred on October 24, 1979, when a natural gas main ruptured, causing an explosion. The resulting fire destroyed the bell tower of the county courthouse and county office building. However, quick action by the firemen on the scene saved the county records which were secured in the vault.

There were 6,780 households, out of which 32.2% had children under the age of 18 living with them, 59% were married couples living together, 11.1% had a female householder with no husband present, and 25.2% were non-families. 20.1% of all households were made up of individuals, and 6.6% had someone living alone who was 65 years of age or older. The average household size was 2.69 and the average family size was 3.08. The median age for all individuals in the county was 59.3 years.

All content from Kiddle encyclopedia articles (including the article images and facts) can be freely used under Attribution-ShareAlike license, unless stated otherwise. Cite this article:
Greene County, Virginia Facts for Kids. Kiddle Encyclopedia.