Rockingham County is a county located in the U.S. state of Virginia. As of the 2010 census, the population was 76,314. Its county seat is the independent city of Harrisonburg.

Settlement of the county began in 1727, when Adam Miller (Mueller) staked out a claim on the south fork of the Shenandoah River, near the line that now divides Rockingham County from Page County. On a trip through eastern Virginia, the German-born Miller had heard reports about a lush valley to the west which had been discovered by Governor Alexander Spotswood's legendary Knights of the Golden Horseshoe Expedition, and then moved his family down from Lancaster County, Pennsylvania. In 1741, Miller purchased 820 acres (3.3 km2), including a large lithia spring, near Elkton, Virginia, and lived on this property for the remainder of his life.

Much-increased settlement of this portion of the Colony of Virginia by Europeans began in the 1740s and 1750s. Standing between the Tidewater and Piedmont regions to the east in Virginia and the Shenandoah Valley and the area beyond (known in old Virginia as the "Transmountaine") were the Blue Ridge Mountains. Rather than cross such a formidable physical barrier, most early settlers came southerly up the valley across the Potomac River from Maryland and Pennsylvania. Many followed the Great Wagon Trail, also known as the Valley Pike (U.S. Route 11 in modern times).

The county is named for Charles Watson-Wentworth, 2nd Marquess of Rockingham, a British statesman (1730–1782). He was Prime Minister of Great Britain twice, and a keen supporter of constitutional rights for the colonists. During his first term, he repealed the Stamp Act of 1765, reducing the tax burden on the colonies. Appointed again in 1782, upon taking office, he backed the claim for the independence of the Thirteen Colonies, initiating an end to British involvement in the American Revolutionary War. However, he died after only 14 weeks in office.

By 1778, it was unusual to honor British officials in Virginia, fighting for its independence. The same year, immediately to the north of Rockingham County, Dunmore County, named for Virginia's last Royal Governor, John Murray, 4th Earl of Dunmore, an unpopular figure, was renamed. The new name, Shenandoah County, used a Native American name.

In 1979 when the Adolf Coors Brewing Company came to Rockingham County it caused an uproar where some citizens thought it would corrupt the morals of the area while others wanted the new jobs. 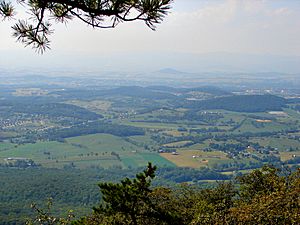 According to the U.S. Census Bureau, the county has a total area of 853 square miles (2,210 km2), of which 849 square miles (2,200 km2) is land and 4.3 square miles (11 km2) (0.5%) is water. It is the third-largest county in Virginia by land area. Large portions of the county fall within the Shenandoah National Park to the east and George Washington National Forest to the west, and therefore are subject to development restrictions. The county stretches west to east from the peaks of eastern-most Alleghany mountains to the peaks of the Blue Ridge mountains, encompassing the entire width of the Shenandoah Valley. Rockingham is bi-sected by another geographic formation, Massanutten Mountain stretching from just east of Harrisonburg, VA to a few miles southwest of Front Royal, VA in Warren County, VA. Massanutten Mountain splits the central Shenandoah Valley as the German River and the North Fork Shenandoah River flow on its western side and the South Fork flows on the eastern.

Rockingham County is principally served by Norfolk Southern Railway, a (major) Class 1 railroad and additionally, by the Shenandoah Valley Railroad, a short-line railroad.

Interstate 81 runs north-south and meets east-west Interstate 64 near Staunton to the south in adjacent Augusta County.

There are three major Primary State Highways in the county. (A primary road provides service which is relatively continuous and of relatively high traffic volume, long average trip length, high operating speed and high mobility importance). Interstate highways and primary highways in Virginia are maintained by the Virginia Department of Transportation (VDOT).

These primary state highways are:

Secondary roads: As provided by the Byrd Road Act of 1932, secondary roads in Rockingham County are also maintained by the Virginia Department of Transportation (VDOT).

The County is proud of its deep agricultural heritage. It leads Virginia in poultry production, and two turkey statues, one at either end of Route 11, indicate that the county is the "Turkey Capital" of Virginia. The annual Rockingham County Fair is one of the top fairs in the nation, and the county has a sizeable old-order-Mennonite farming presence, supporting numerous farmers' markets.

Rockingham County is home to a large section of the Shenandoah National Park and Skyline Drive, with an entrance point at Swift Run Gap. Boasting numerous hiking and walking trails, as well as scenic overlooks and waterfalls, the park is one of the focal points of Shenandoah Valley tourism. Numerous caves dot Rockingham county, including Grand Caverns in Grottoes, VA. The county also is home to a large section of the George Washington National Forest, offering camping and outdoor activity. Massanutten Resort offers two golf courses and an indoor water park, as well as seasonal skiing, mountain biking and river rafting.

Two Civil War battles took place in Rockingham County, one at Cross Keys, just southeast of Harrisonburg, and another at Port Republic, along the South Fork of the Shenandoah River just north of Grottoes. Among local museums, the Harrisonburg-Rockingham Historical Society in Dayton, VA is unique for its 20-foot multimedia wall-map narrating the troop-movements of Jackson's Valley Campaign.

Since it became an independent city, Harrisonburg is no longer politically located in Rockingham County, despite its status as the county seat.

All content from Kiddle encyclopedia articles (including the article images and facts) can be freely used under Attribution-ShareAlike license, unless stated otherwise. Cite this article:
Rockingham County, Virginia Facts for Kids. Kiddle Encyclopedia.