Elkton (formerly Conrad's Store) is an incorporated town in Rockingham County, Virginia, United States. It is included in the Harrisonburg Metropolitan Statistical Area. The population was 2,762 at the 2010 census. Elkton was named for the Elk Run stream.

It is located along the south fork of the Shenandoah River at the intersections of east-west U.S. Route 33 and north-south U.S. Route 340. The town celebrated its 100th anniversary in 2008.

One of the first European-Americans to settle permanently in the area was Adam Miller (Mueller), a native of Germany. In 1741, Miller purchased 820 acres (3.3 km2), including a large lithia spring, near Elkton and lived on this property for the remainder of his life. He sold 280 acres (1.1 km2) of this property to his son-in-law, Jacob Baer, and the spring on Miller’s land is still known as Bear Lithia Spring.

Conrads Store was a general store built by George Conrad about 1812. George Conrad was a son of Captain Stephen Conrad who served during the American Revolution. In 1816, Conrads Store became a United States post office with George Conrad as its first postmaster. During the American Civil War (1861–1865), Conrads Store operated as a Confederate post office. In September 1866, postal service was briefly discontinued at Conrads Store, and intermittently resumed and discontinued over the next decade until 1881 when the name, Elkton, was adopted as the name of new passenger station of the Shenandoah Valley Railroad. In January 1881, Elkton, Virginia was established as a post office. The Town of Elkton was officially incorporated on March 14, 1908.

An important building in the town's history is the Jennings House. Built in 1840 by Dr. Samuel B. Jennings, the house was transformed into a hospital during the Civil War. The historic Jennings House was converted to house the local government. The town Christmas tree can be found across the street from the house.

Located on Rockingham Street, the Miller-Kite House was the headquarters of General Stonewall Jackson at the start of the Shenandoah Valley Campaign during the Civil War. Now the house is a town landmark and museum, housing many items from the war and some of Jackson's personal belongings. In one of the second-story windows a cardboard cutout of the General watches the street. Many visitors report stories of ghosts or unusual behavior while in the house.

In addition to the Miller-Kite House, Bon Air and the Kite Mansion are listed on the National Register of Historic Places. 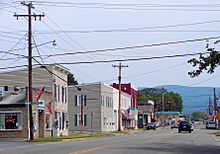 Elkton with the Blue Ridge Mountains in the background

There were 862 households out of which 28.3% had children under the age of 18 living with them, 47.9% were married couples living together, 11.0% had a female householder with no husband present, and 35.5% were non-families. 28.7% of all households were made up of individuals and 11.3% had someone living alone who was 65 years of age or older. The average household size was 2.34 and the average family size was 2.86.

All content from Kiddle encyclopedia articles (including the article images and facts) can be freely used under Attribution-ShareAlike license, unless stated otherwise. Cite this article:
Elkton, Virginia Facts for Kids. Kiddle Encyclopedia.