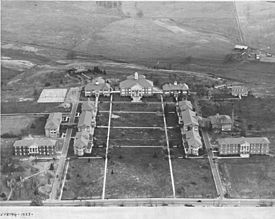 Aerial view of campus from 1937, showing the original campus plan, prior to major expansions of the campus

Founded in 1908 as a women's college, James Madison University was established by the Virginia General Assembly. It was originally called The State Normal and Industrial School for Women at Harrisonburg. At first, academic offerings included only today's equivalent of technical training or junior college courses; however permission to award bachelor's degrees was granted in 1916. During this initial period of development, the campus plan was established and six buildings were constructed.

The university became the State Teachers College at Harrisonburg in 1924 and continued under that name until 1938, when it was named Madison College in honor of James Madison, the fourth President of the United States whose estate is located in nearby Orange, Virginia. In 1976, the university's name was changed to James Madison University.

The first president of the university was Julian Ashby Burruss. The university opened its doors to its first student body in 1909 with an enrollment of 209 students and a faculty of 15. Its first 20 graduates received diplomas in 1911. In 1919, Julian Burruss resigned the presidency. 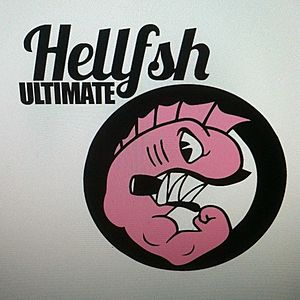 The Hellfish logo, found on team jerseys, discs, and other apparel

In 1946, men were first enrolled as regular day students. During 1949 to 1970, the campus was enlarged and 19 buildings were constructed. Major curriculum changes were made and the university was authorized to grant master's degrees in 1954.

In 1966, by action of the Virginia General Assembly, the university became a coeducational institution. Ronald E. Carrier, JMU's fourth president, headed the institution from 1971 to 1998. During Carrier's administration, student enrollment and the number of faculty and staff tripled, doctoral programs were authorized, more than twenty major campus buildings were constructed and the university was recognized repeatedly by national publications as one of the finest institutions of its type in America.

James Madison University now has over 350 clubs and organizations for students to choose from. The goal is to provide students with a unique experience that will help them to grow within the community and lifestyle outside of the classroom.

All content from Kiddle encyclopedia articles (including the article images and facts) can be freely used under Attribution-ShareAlike license, unless stated otherwise. Cite this article:
James Madison University Facts for Kids. Kiddle Encyclopedia.