Christina Tosi (born 1981) is an American chef, author, and television personality. She is the chef, founder, owner, and CEO of Milk Bar, the sister bakery to the Momofuku restaurant group, with seventeen locations across North America. She is influential in the culinary industry, and was featured on Food & Wine magazine's list of "Most Innovative Women in Food and Drink" in 2014.

Outside of her cooking career, she is the author of four cookbooks: Momofuku Milk Bar, Milk Bar Life, All About Cake, and Milk Bar: Kids Only. Since 2014, she has starred sporadically as a judge on the competitive reality series MasterChef, and has made several appearances on television.

Tosi was born in Ohio and raised primarily in Springfield, Virginia to an agricultural economist father of Italian origin and to an accountant mother.

Growing up in the suburbs of Virginia, Tosi says that cooking has always been a part of who she is. She was raised by women who love to bake, the heart of kitchens and homes she grew up in revolved around causally made goods. As a child experimenting with food, she would often walk to the supermarket and play around with flavors that everyone had access to like marshmallow, cornflakes, chocolate chips, and sprinkles.

After studying to become an electrical engineer for one year at the University of Virginia, she spent time in Florence, Tuscany, Italy, to see if she wanted to be a translator. Eventually, she graduated from James Madison University. After graduating, Tosi decided to turn her love of home baking into a profession and moved to New York City and enrolled in the French Culinary Institute's pastry arts program.

On July 30, 2016, Tosi married New York City-based restaurateur Will Guidara. In March 2021, they welcomed a daughter.

Tosi entered the culinary field at the fine dining restaurant, Bouley, and then advanced to wd~50. In 2005, she helped to write wd~50’s Hazard Analysis Critical Control Point plan. Tosi realized it was time to make a shift "because I thought loving to make dessert in a professional capacity meant being at the top of your game, and being at the top of your game was being the most expensive fine dining establishment" and soon realized that being an executive pastry chef at a fine dining restaurant was not her passion.

On the recommendation of Wylie Dufresne, David Chang hired Tosi in 2005 at Momofuku to write his food safety plans and help administratively with the NYC Department of Health. Tosi would often bake cookies at night and them bring them in for the kitchen staff and Chang was so impressed with Tosi that he hired her to run their pastry program. There were no desserts on Chang's menu when Tosi came on board, and she created her own pastries, putting her extreme spin on childhood favorites, from cereal-milk panna cotta to fried apple pies with sour-cream ice cream and toasted miso. Tosi credits Chang with giving her the push she needed to open Milk Bar. 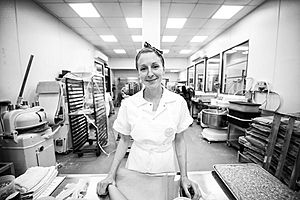 In 2008, Momofuku Ssam Bar's adjoining next store space became available, and Chang encouraged Tosi to open her own shop, which she named Milk Bar. Milk Bar first opened its doors on November 15, 2008. When they first opened, Milk Bar had a team of only five people and were often open for 16 hours a day. She had free rein to develop new recipes and the menu soon featured her trademarked Cereal Milk, Compost Cookies, Crack Pie (now known as Milk Bar Pie) and Candy Bar Pie. Tosi had the goal of taking the technicality of what pastry chefs were doing and carve out her own niche in the more informal setting of a bakery. Tosi says Milk Bar was so successful initially because “in a beautiful way it resonated with people because when you buy a cookie you’re buying it something so human, if you ever had a cookie or a cake or a pie you’ve probably had it from someone that’s in your family that cares about you”. This imaginative revisiting of childhood memories, folding high concept into playfulness, has become a true institution across the U.S., with boutiques and pop-ups. Tosi describes the goal at Milk Bar to “make it the most delicious thing you’ve ever eaten. It may not look perfect and refined, but it's about being comfortably human in that space.”

In December 2009, Anderson Cooper appeared on Regis and Kelly professing his love for Milk Bar and its Crack Pie. By 2012, Milk Bar had grown from one retail sales location in the East Village of Manhattan to nine retail outlets in New York City, one in Toronto, Canada (opened in 2013), three in Washington, D.C. (opened in October 2015, February 2018 and May 2018) one in Las Vegas, Nevada, at the Cosmopolitan of Las Vegas (opened in December 2016). and one in Los Angeles on Melrose Avenue (opened in September 2018). Tosi opened her first Boston-area store in Harvard Square in Cambridge, Massachusetts, in a unique partnership with &pizza, a Washington D.C.-based pizzeria chain. The Boston store was Tosi's 16th Milk Bar.

By February 2019, Milk Bar employed 381 people across North America. During the spring of 2020 when many restaurants were closed as a result of the Covid-19 pandemic, Tosi and Milk Bar started to distribute their signature cookies through selected online and national retail food stores, starting with Whole Foods in April 2020, Amazon in May 2020, and Target in October 2020.

Momofuku Milk Bar, Tosi's first book, was published by Clarkson Potter in October 2011. This book mostly contains recipes of the desserts that are sold at Momofuku Milk Bar. Many reviewers praised her first book. Lisa Messinger wrote, "Tosi is a talented new voice you want whispering in your ear as you bake." Although reviewers praised the sweet concoctions that were included in the first book, a reviewer for The Washington Post wrote that because the book is not written for the home cook, she found it very demanding to prepare the recipes since they are not tested for use in a home kitchen. A reviewer for the Austin Chronicle wrote that preparation of some of the recipes was "a massive pain" to prepare due to the fact that there were many "sub-recipes" to be prepared before making the main item.

Tosi appeared in a television ad for Subaru in 2014, and also did promotional work for American Express, Kellogg's, and Estée Lauder. She joined the judging panel of MasterChef on Fox beginning with its sixth season, which premiered 20 May 2015, as well as the fourth season of MasterChef Junior, which premiered 6 November 2015. In April 2015, Tosi was featured on an episode of Conan making sweet desserts with leftover candy and a hammer. In April 2018, an episode of Chef's Table: Pastry featuring Tosi debuted on Netflix. She is the first production baker to be featured on the series.

In 2012, Tosi began marketing cookie mixes through Williams Sonoma stores. The cookie mix venture was replaced in 2015 by an exclusive distribution deal with Target. Milk Bar Life, Tosi's second book, was published by Random House in April 2015. This book contains recipes for dishes, some savory, that the author and other chefs may prepare for themselves and friends during their off hours. A reviewer of Milk Bar Life praised it for including recipes for more savory dishes, easier-to-obtain ingredients, and being more geared to the home cook than the previous one. Jenny Rosenstrach of the New York Times Book Review wrote of her second book, "It's impossible not to be charmed by the chatty Tosi and her hot pink and bubble-letter-filled never-never land..." The book includes tips like making your own Lambrusco using red wine in a Sodastream.

In 2018, Tosi and Milk Bar had executed several partnerships, including cookies with JetBlue, a lip balm with Glossier, a clothing and cookie mix collection with Madewell, and SoulCycle's first ever food offering in studios, the SoulFuel cookie. At the beginning of the COVID-19 pandemic, Tosi launched her Bake Club; an online community where Tosi’s followers could bake alongside her daily while learning to bake new recipes. Tosi’s Bake Club gave her followers an opportunity to learn classic Milk Bar treats while also testing new potential menu items. Tosi introduced this club to bring a “regular consistent touch point of positivity” to a world full of uncertainty.

Tosi has been featured in a variety of national publications, including the list of "Most Innovative Women in Food and Drink" by Food and Wine Magazine in 2014. In 2014, Glamour featured her in "The Power of Taking Risks and the Magic Behind Momofuku Milk Bar". She has also been featured Multiple times by The Wall Street Journal and The New York Times.

All content from Kiddle encyclopedia articles (including the article images and facts) can be freely used under Attribution-ShareAlike license, unless stated otherwise. Cite this article:
Christina Tosi Facts for Kids. Kiddle Encyclopedia.