Amherst County is a county, located in the Piedmont region and near the center of the Commonwealth of Virginia in the United States. The county is part of the Lynchburg, VA Metropolitan Statistical Area, and its county seat is also named Amherst.

Amherst County was created in 1761 out of Albemarle County, and it was named in honor of Lord Jeffery Amherst, the so-called "Conqueror of Canada". In 1807 as population increased, the county was reduced in size in order to form Nelson County. Tobacco was the major cash crop of the county during its early years. The labor-intensive crop was worked and processed by enslaved Africans and African Americans before the American Civil War. 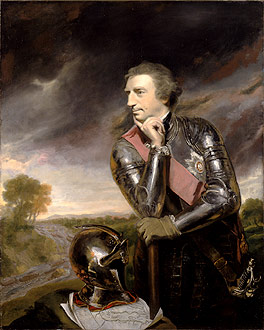 Jeffery Amherst, called the "Conqueror of Canada", for whom the county was named

Native Americans were the first humans to populate the area. They hunted and fished mainly along the countless rivers and streams in the county. With the establishment of the Virginia Colony in 1607, English emigrants arrived in North America. By the late 17th century English explorers and traders traveled up the James River to this area. Early trading posts formed between 1710 and 1720. By 1730, many new families moved into the land currently known as Amherst County drawn by the desire for land and the good tobacco-growing soil.

Amherst County was formed in 1761, from part of southwestern Albemarle County. The original county seat had been in Cabelsville, now Colleen in what would later become Nelson County. The county was named for Lord Amherst, known as the "Conqueror of Canada", who commanded the British forces that successfully secured Canada from the French. Jeffery Amherst had also previously been named Governor of Virginia, although he never came to the colony. In 1806 the county assumed its present proportions when Nelson County was formed from its northern half. At that point, the county seat was moved to the village of Five Oaks, later renamed Amherst. The present county courthouse was built in 1870 and has served the county ever since. On a historically interesting note, Amherst County produced more Confederate soldiers per capita than anywhere else in the C.S.A.

In the early days, the major crop raised in Amherst County was tobacco. Apple orchards were part of mixed farming that replaced tobacco, especially in the late 19th century. Timber, mining and milling were also important industries. The introduction of the railroad in the late 19th century greatly influenced the county's growth. The county contains many good examples of 18th, 19th and early 20th century rural and small town architecture. The downtown area of Amherst is a classic example of early 20th century commercial architecture.

There are numerous attractions throughout the county that entertain many people throughout the area. With the three recreational and public lakes being Mill Creek, Thrashers Lake, and Stonehouse Lake, there is plenty to do on the water. Many like to fish, canoe, or kayak in the water or simply have a cookout along the side of the lakes. There are also many trails and parks that anyone is welcome to visit at any time. There is a significant portion of the Appalachian Trail that runs through the George Washington National Forest in Amherst. There are many offshoot trails that highlight peaks in Amherst such at Mt. Pleasant, Cold Mountain, and Tar Jacket Ridge. There are many local restaurants in the county such at the Briar Patch, Travelers, Vitos Grill, Charlies Chicken, and many others that are very popular spots among the locals who frequent the various eateries.

Festivals in the area 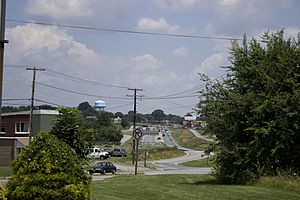 Looking towards U.S. 29 in Madison Heights

All content from Kiddle encyclopedia articles (including the article images and facts) can be freely used under Attribution-ShareAlike license, unless stated otherwise. Cite this article:
Amherst County, Virginia Facts for Kids. Kiddle Encyclopedia.