Ellisville is a town in and the first county seat of Jones County, Mississippi, United States. The population was 4,448 at the time of the 2010 census, up from 3,465 at the 2000 census. The Jones County Courthouse is located here, as is much of the county government.

The state legislature authorized a second county seat at Laurel, to the northeast, which developed as the center of lumber and textile mills, with a much larger population. Ellisville is part of the Laurel micropolitan statistical area.

The city is named for Powhatan Ellis, a former U.S. Senator for Mississippi who identified as a descendant of Pocahontas and her father, Chief Powhatan in Virginia. Ellisville was designated as the county seat, and it became the major commercial and population center of Jones County through the early decades of development in the nineteenth century.

During the American Civil War, Ellisville and Jones County were a center of pro-Union resistance. The county had mostly yeomen farmers and cattle herders, who were not slaveholders. Slaves constituted only 12% of the county's population in 1860, as conditions generally did not support cultivation of large cotton plantations. It had the lowest proportion of slaves of any county in the state in 1860. Many local men resented going to war to support slaveholders, and worried about the survival of their families, where women and children worked to keep subsistence farms going. They resented Confederate tax collectors who took the goods and stores their families needed to live.

Confederate deserters and refugee slaves formed a resistance group known as the Knight Company, led by Newton Knight (self-appointed captain), First Lieutenant Jasper Collins, and Second Lieutenant William Wesley Sumrall. They were known to take refuge in a swamp along the Leaf River. Along with as many as 100 other southern men, they fought several skirmishes with tax men and other Confederate units eventually sent to crush the resistance. In 1864 they took control in Ellisville, raising the United States flag over the courthouse in place of the Confederate flag.

In the late 19th and early 20th centuries, Ellisville lost primacy to nearby Laurel, Mississippi, which became a center of the timber industry and cotton textile mills. Its population in the mid-20th century was nearly six times that of Ellisville. Laurel has attracted other industries and is the center of a Micropolitan Statistical area. The Jones County Sheriff's Department is based in Laurel. But the county government is still based in Ellisville, at the Jones County Courthouse.

Ellisville reflects the demographics of the county, and is majority white. Laurel is majority African American in population, reflecting the migration of agricultural workers to the city for industrial and urban jobs. 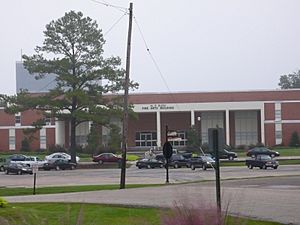 Ellisville is served by the Jones County School District. South Jones High School is located in Ellisville. Their mascot is the Braves.

Ellisville is also home to Jones County Junior College. Their mascot is the Bobcats. 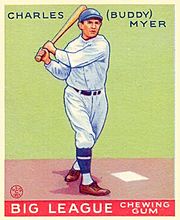 All content from Kiddle encyclopedia articles (including the article images and facts) can be freely used under Attribution-ShareAlike license, unless stated otherwise. Cite this article:
Ellisville, Mississippi Facts for Kids. Kiddle Encyclopedia.