Esmont is a census-designated place (CDP) in Albemarle County, Virginia, United States. The population as of the 2020 Census was 491. 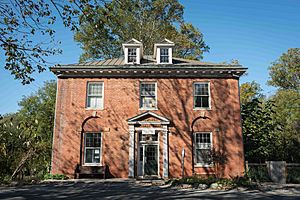 The town was built from land purchased from the former Esmont plantation estate, for which the town was named. Having rich soil, the town has historically been a farming community with a predominantly African American population. The area has been populated since the eighteenth century, though it did not acquire a post office until the latter part of the nineteenth century.

All content from Kiddle encyclopedia articles (including the article images and facts) can be freely used under Attribution-ShareAlike license, unless stated otherwise. Cite this article:
Esmont, Virginia Facts for Kids. Kiddle Encyclopedia.