Crozet is a census-designated place (CDP) in Albemarle County in the Commonwealth of Virginia, United States. It sits along the I-64 corridor, about 12 miles (19 km) west of Charlottesville and 21 miles (34 km) east of Staunton. Originally called "Wayland's Crossing," it was renamed in 1870 in honor of Colonel Claudius Crozet, the French-born civil engineer who directed the construction of the Blue Ridge Tunnel. The cornerstone of Crozet is believed to have been Pleasant Green, a property also known as the Ficklin-Wayland Farm, located yards from the actual Wayland Crossing. Claudius Crozet is said to have lodged in that property while surveying the land that today honors his name. The population of Crozet was 5,565 at the 2010 census. Crozet is part of the Charlottesville Metropolitan Statistical Area.

The Crozet Historic District was listed on the National Register of Historic Places in 2012. 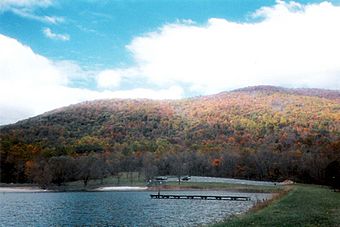 Because of Crozet's location in the foothills of the Blue Ridge Mountains, its natural scenery is one of its distinguishing features. Outdoor activity is popular among residents and visitors. 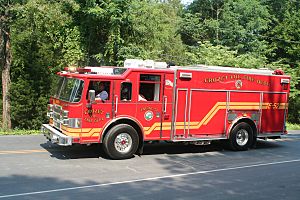 Traditionally a railroad town with farming and orchards, Crozet has become much more culturally diverse since the turn of the century (2000). Many of the new residents are outdoor enthusiasts. Home based, online employment is common and many work professional jobs in nearby Charlottesville. Wineries and breweries have blossomed in the area providing tourism and employment.

Each year, Crozet holds an Independence Day celebration, which consists of a parade through the downtown area, a carnival in Crozet Park lasting for several days, and a sizeable fireworks show to bring the festivities to a close.

The 2007 comedy film Evan Almighty (the sequel to Bruce Almighty) was partially filmed in Crozet. The ark seen in the movie, as well as the set for Evan's neighborhood, was constructed there. The film set was situated on a plot of land across from Western Albemarle High School which later became a housing subdivision.

2007 marked the start of the (now defunct) Crozet Music Festival an all day festival with local artists such as Terri Alard, Sons of Bill, Trees on Fire, etc. coming out to support SAm Park

Crozet has been home to the Starr Hill Brewery since 2005, having relocated from nearby Charlottesville.

The future of Crozet

Over the past fifteen years, Crozet has seen an increasing rate of housing development, in part because of nearby Charlottesville's reputation as a desirable location, but also because Albemarle County named Crozet as a designated growth area. While parts of the County are growing significantly, 95% of the County remains designated as rural.

In 2001, the Albemarle County Board of Supervisors approved a framework dubbed the "Crozet Master Plan", developed by a local architect and regional planning firm,[1][2] in order to regulate development patterns and provide a public forum for discussing the topic. The Master Plan allows the population of Crozet to grow to over 12,000 people by the 2020s—more than four times the 2001 population. By 2013, the population had swelled to over 7000. These numbers have alarmed some long-time residents who are accustomed to the rural tranquility of Crozet, and over a thousand people have petitioned the county to cut down on the number of planned households. Another change coming to Crozet involves the redevelopment of the old Barnes Lumber property which encompasses much of the downtown section.

The Crozet Historic District was listed the National Register of Historic Places in 2012.

Historically, Crozet was strategically important as a depot and transportation hub for the local apple and peach growing industries. Morton Frozen Foods had its flagship manufacturing plant in Crozet from August 1, 1953, until the late 1990s. In 2000, the plant was closed by food packaging company ConAgra Foods, which owned the brand, laying off more than 600 employees. As of 2016, Musictoday, acquired in 2014 by San Francisco-based Delivery Agent Inc., an interactive entertainment-commerce firm, operates out of the building, as does Starr Hill Brewery, which moved from Charlottesville in 2006.

From 1990 to 2005, Crozet saw increasing housing development, in part because of nearby Charlottesville's reputation as a desirable location, but also because Albemarle County named Crozet as a designated growth area. Some 95% of the County remains designated as rural.

In 2001, the Albemarle County Board of Supervisors approved a framework dubbed the "Crozet Master Plan", developed by a local architect and regional planning firm,[3][4] to regulate development patterns and provide a public forum for discussing the topic. The Master Plan allows the population of Crozet, then around 3,000, to quadruple to more than 12,000 by the 2020s. These numbers alarmed some long-time residents who are accustomed to the rural tranquility of Crozet; more than a thousand people petitioned the county to reduce the number of planned households. In 2006, a plan was approved to redevelop the old Barnes Lumber property, which encompasses much of the downtown section. In 2007, the population passed 7,000.

Around 2017, a complex of luxury apartments and various restaurants and shops was built in downtown Crozet. Called the Piedmont Place, it houses restaurants like Smoked Kitchen and Tap and The Rooftop. It also houses Morsel Compass and Crozet Creamery. 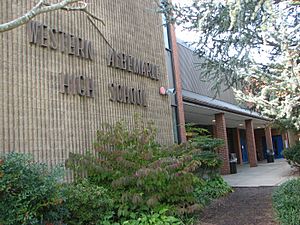 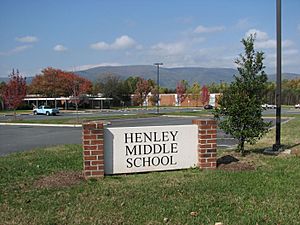 Western Albemarle High School is a public high school serving the central area of Albemarle County. The school was opened in September 1977. It is situated at the foot of the Blue Ridge Mountains on a 75-acre (30 ha) site and has an approximate enrollment of 1,100 students. The school's athletic mascot is the Warrior. The school is known for its strong academic, as well as athletic performances.

J. T. Henley Middle School is a middle school, located on approximately 30 acres (12 ha) of land, that feeds into Western Albemarle High School. It was first opened in 1966. The school was built using the same blueprints as Jack Jouett Middle School. However, after a renovation/addition in 1999, the two schools differ slightly in design. Henley has a capacity of 690 students, although as of 2006 only 597 students were enrolled with 72 faculty members. By 2020, the student enrollment neared 1,000. The school's athletics mascot is the Hornets, and the current principal is Dr. Beth Costa.

Other schools that feed into Henley are Meriwether Lewis Elementary and Murray Elementary, both of which are located in the vicinity of Ivy, Virginia.

Crozet is represented on the Albemarle County School Board by two elected members, David Oberg, who represents the White Hall Magisterial District and Jonathan Alcarro, the At-Large member of the School Board. Both Mr. Oberg and Mr. Alcarro were elected to four year terms in November 2015.

Crozet is also home to a branch of the Jefferson-Madison Regional Library System. The Crozet Library was housed in a railway depot which was built in 1923 by the Chesapeake and Ohio Railway. The new Crozet Library is [http://realcrozetva.com/2012/12/10/bricking-of-the-crozet-library/ now open. The Crozet/Western Albemarle Library, now open 52 hours each week, is a permanent public space that encourages and nurtures intellectual freedom and curiosity, and supports JMRL’s mission to help its communities grow, learn and connect. The building is designed to provide a collection of over 75,000 books. In addition to being an anchor for an active, growing community, the library stands as a permanent testament to the County and citizenry's dedication to lifelong learning.

All content from Kiddle encyclopedia articles (including the article images and facts) can be freely used under Attribution-ShareAlike license, unless stated otherwise. Cite this article:
Crozet, Virginia Facts for Kids. Kiddle Encyclopedia.