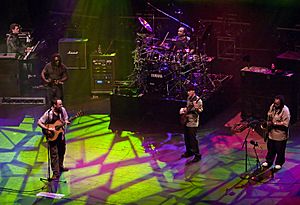 Dave Matthews Band (DMB) is a band from the United States. In 1991, Dave Matthews started the band in Charlottesville, Virginia. The other band members are Stefan Lessard, Boyd Tinsley, and Carter Beauford. Saxophone player LeRoi Moore was in the band until he died in 2008. Since 1998, they usually performed with Butch Taylor, too. Rashawn Ross also performed with the band from 2006-2007.

The Dave Matthews Band has written 235 songs (included cover songs). They have sold over 31 million albums in the United States, and are one of the Top 100 Highest Selling Music Acts of all time. The Dave Matthews band has a unique style that stretches across many genres.

They have a fan-base that stretches across many generations and types of people.

All content from Kiddle encyclopedia articles (including the article images and facts) can be freely used under Attribution-ShareAlike license, unless stated otherwise. Cite this article:
Dave Matthews Band Facts for Kids. Kiddle Encyclopedia.