Scottsville is a town in Albemarle and Fluvanna counties in the U.S. state of Virginia. The population was 566 at the 2010 census. It is part of the Charlottesville Metropolitan Statistical Area. 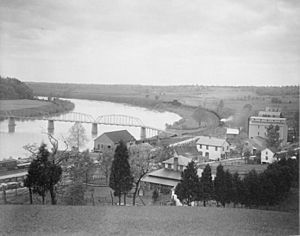 View from hillside of Old Scott's Ferry (circa 1911)

According to Scottsville's website, the town "served as Virginia's westernmost center of government and commerce during the 1700s, when rivers were the primary means of travel in the new American wilderness." During the late 18th and the 19th centuries attempts were made to improve navigability along the James, as well as other central Virginian rivers. Part of this was the construction of a canal running roughly parallel with the James west from Richmond. Scottsville was the largest port town along this route, called the James River and Kanawha Canal. The ultimate goal of this project was to connect the Atlantic with the Ohio River via the Kanawha River. These aims were not achieved, due to interruption by the American Civil War and the efficiency of the railroads. It did however succeed in making Scottsville a busy, prominent town. In fact, thanks to a wagon road connecting Staunton to Scottsville, all of the agricultural wealth of the Shenandoah Valley poured into town en route to Richmond and the sea, thereby making Scottsville the largest grain market in the state. Trade was disrupted when Union soldiers broke the canal works in the area. Then the train came, the tracks being laid directly on the towpath of the old canal, a monument to its demise. Eventually, the train too stopped taking passengers, leaving Scottsville a sleepy country town on a coal line.

Located near Scottsville, the Hatton Ferry serves as a seasonal crossing of the James River and has been the location of a ferry since the late 1870s.

Scottsville was the birthplace of Thomas Staples Martin, who served five terms as a Democrat in the United States Senate representing Virginia. Born at Scottsville in 1847, Martin served in the Confederate Army, then went on to practice law. 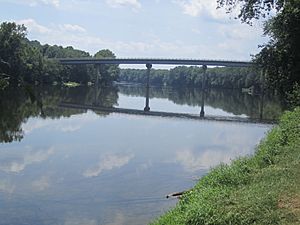 According to the United States Census Bureau, the town has a total area of 1.5 square miles (4.0 km2), all land.

There were 256 households out of which 24.2% had children under the age of 18 living with them, 42.2% were married couples living together, 12.9% had a female householder with no husband present, and 43.0% were non-families. 35.2% of all households were made up of individuals and 14.1% had someone living alone who was 65 years of age or older. The average household size was 2.17 and the average family size was 2.82. 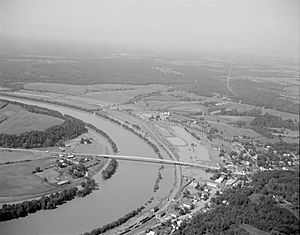 Scottsville has been flooded several times due to its proximity to the James River. Since 1870, Scottsville has been the victim of twenty-one floods (defined as water levels of twenty feet or more above the average low water level). In 1985, the Army Corps of Engineers built a levee around the lowest portion of Scottsville, providing protection against further floods. Mayor A. Raymon Thacker spearheaded the movement to build the levee starting after Hurricane Agnes to prevent any more floods affecting Scottsville. The levee has been very effective preventing numerous floods in the post levee era.

All content from Kiddle encyclopedia articles (including the article images and facts) can be freely used under Attribution-ShareAlike license, unless stated otherwise. Cite this article:
Scottsville, Virginia Facts for Kids. Kiddle Encyclopedia.