Staunton ( STAN-tən) is an independent city in the U.S. state of Virginia. As of the 2010 census, the population was 23,746. In Virginia, independent cities are separate jurisdictions from the counties that surround them, so the government offices of Augusta County are in Verona, which is contiguous to Staunton.

Staunton is a principal city of the Staunton-Waynesboro Metropolitan Statistical Area, which had a 2010 population of 118,502.

Staunton is known for being the birthplace of Woodrow Wilson, the 28th U.S. president, and the home of Mary Baldwin University, historically a women's college. The city is also home to Stuart Hall, a private co-ed preparatory school, as well as the Virginia School for the Deaf and Blind. 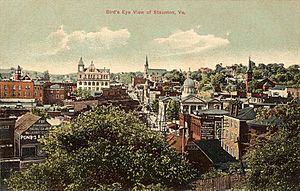 The area was first settled in 1732 by John Lewis and family. In 1736, William Beverley, a wealthy planter and merchant from Essex County, was granted by the Crown over 118,000 acres (48,000 hectares) in what would become Augusta County. Surveyor Thomas Lewis in 1746 laid out the first town plat for Beverley of what was originally called Beverley's Mill Place. Founded in 1747, it was renamed in honor of Lady Rebecca Staunton, wife to Royal Lieutenant-Governor Sir William Gooch. Because the town was located at the geographical center of the colony (which then included West Virginia), Staunton served between 1738 and 1771 as regional capital for what was known as the Northwest Territory, with the westernmost courthouse in British North America prior to the Revolution. By 1760, Staunton was one of the major "remote trading centers in the backcountry" which coordinated the transportation of the vast amounts of grain and tobacco then being produced in response to the change of Britain from a net exporter of produce to an importer. Staunton thus played a crucial role in the mid 18th century expansion of the economies of the American Colonies which, in turn, contributed to the success of the American Revolution. It served as capital of Virginia in June 1781, when state legislators fled Richmond and then Charlottesville to avoid capture by the British. 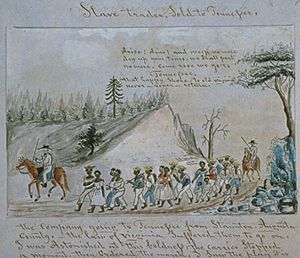 Lewis Miller, Sketchbook of Landscapes in the State of Virginia, 1853-1867. Courtesy, Abby Aldrich Rockefeller Folk Art Museum, Colonial Williamsburg Foundation, Williamsburg, Virginia; slide 84-896c.Titled, "Slave trader, Sold to Tennessee." The caption states: " The company going to Tennessee from Staunton, Augusta county, the law of Virginia suffered them to go on. I was astonished at this boldness, the carrier stopped a moment, then ordered the march, I saw the play it is commonly in this state, when the negro’s in droves Sold."

Slaves were held in Staunton. For instance, in 1815, a slave named Henry ran away from John G. Wright's Staunton plantation. Wright later placed an ad in the Daily National Intelligencer in Washington, D.C. seeking Henry's return. This ad is notable in its genre for the fact that it notes that Henry was an excellent cook and was widely travelled, having been to the West Indies.

The Civil War and immediately prior 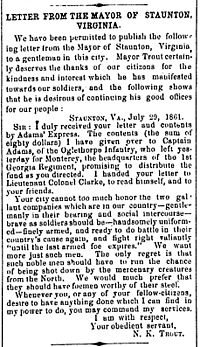 Letter from N.K. Trout, mayor of Staunton, describing a contribution of $80 to the 1st Georgia Regiment, then encamped at Monterey, Virginia. Published in the Daily Constitutionalist of Augusta, Georgia on August 6, 1861

In August 1855, President Franklin Pierce visited Staunton. He gave a speech at the Virginia Hotel, in which he stated that his "feelings revolted from the idea of a dissolution of the union." He said that "[i]t would be the Iliad of innumerable woes, from the contemplation of which he shrank."

Located along the Valley Pike, Staunton developed as a trade, transportation and industrial center, particularly after the Virginia Central Railroad arrived in 1854. Factories made carriages, wagons, boots and shoes, clothing and blankets. In 1860, the Staunton Military Academy was founded. By 1860, Staunton had at least one pro-union, pro-slavery (the Staunton Spectator) and at least one pro-secession, pro-slavery newspaper (the Staunton Vindicator). The Spectator ran editorials before the war urging its citizens to vote for union, while the Vindicator ran, e.g., stories reporting on "unruly" slaves mutilating themselves to escape being sold.

On May 23, 1861, Virginians voted on whether or not to ratify articles of secession from the Union. The articles were overwhelmingly approved throughout the Commonwealth. In Staunton the vote was 3300 in favor of secession and 6 opposed. During the Civil War, the town became an important Shenandoah Valley manufacturing, staging area and supply depot for the Confederacy. On May 2, 1862, Union General John C. Frémont occupied Staunton while on his way to a rendezvous with General Nathaniel P. Banks to pursue Stonewall Jackson into what would become known as the Battle of Cross Keys, fought near Harrisonburg, Virginia on June 6–7, 1862. By October 1862 Staunton was back in rebel hands, occupied by the 2nd South Carolina infantry.

On June 6, 1864, Union Major General David Hunter arrived with 10,000 troops to cut supply, communication and railway lines useful to the rebellion. The next day, they destroyed the railroad station, warehouses, houses, factories and mills. Union soldiers looted stores and warehouses and confiscated supplies. 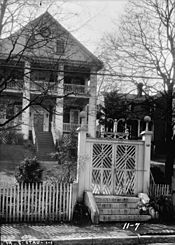 In 1908, Staunton created the city manager form of government. Charles E. Ashburner was hired by Staunton as the nation's first city manager.

According to the United States Census Bureau, the city has a total area of 20 square miles (52 km2), virtually all of which is land. Staunton is located in the Shenandoah Valley in between the Blue Ridge and Allegheny Mountains of the Appalachian Mountains. It is drained by Lewis Creek. Lewis Creek flows into the Shenandoah River, which flows into the Potomac, and eventually to the Chesapeake Bay.

The climate in this area is characterized by hot, humid summers and generally mild to cool winters. According to the Köppen Climate Classification system, Staunton has a humid subtropical climate, abbreviated "Cfa" on climate maps.

There were 9,676 households out of which 24.9% had children under the age of 18 living with them, 44.4% were married couples living together, 11.7% had a female householder with no husband present, and 40.4% were non-families. 34.7% of all households were made up of individuals and 14.3% had someone living alone who was 65 years of age or older. The average household size was 2.19 and the average family size was 2.81.

In 2011, Tim Heaphy, the U.S. Attorney for the Western District of Virginia stated that Staunton, along with other small cities in his district, had "pockets of ... gang and drug activity." As late as 2006, the city had an active set of the Bloods. According to Augusta County Sheriff Randy Fisher, the Bloods, Crips, Latin Kings and MS-13 are active in the area. 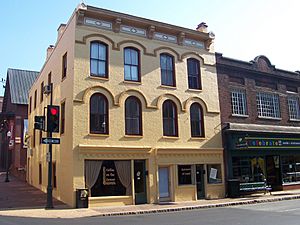 The By & By Café and Beer Garden, with Blackfriars Playhouse and the Stonewall Jackson Hotel behind 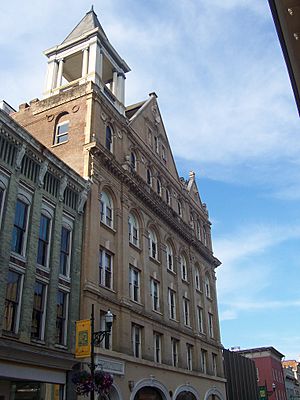 Staunton is home to the American Shakespeare Center, a theatrical company centered at the Blackfriars Playhouse, a replica of Shakespeare's Blackfriars Theatre. In 2012, it also became the home of the Heifetz International Music Institute, named for renowned violinist Daniel Heifetz, a summer music school and festival dedicated to the artistic growth and career development of some of the world’s most talented and promising classical musicians. The Woodrow Wilson Presidential Library is open for visitors, as well as the Museum of American Frontier Culture, which provides insight into life in early America.

Staunton is also the center of numerous galleries and art schools, including The Dwell Collective and the widely regarded Beverley Street Studio School, and its associated Co-Art Gallery. In addition Staunton is home to the Hypnagogia Film Collective, a collection of avant-garde experimental filmmakers.

Staunton is home to the Statler Brothers, country music legends who until 1994 performed free concerts at the annual Fourth of July celebration, accompanied by other country music artists. Statler Brothers members Don Reid, Harold Reid, and Phil Balsley grew up and still reside in the city. Lew DeWitt was also a notable member of the Statlers who grew up in Staunton, VA.

Folksinger Phil Ochs attended Staunton Military Academy between 1956 and 1958, where he played clarinet in the marching band. His exposure to the country music played on local radio, quite different from what he was used to hearing in his home state of Ohio, was a significant influence on his decision to become a singer.

Downtown Staunton and Sherwood Avenue were used in the American Civil War film Gods and Generals. The local Shenandoah Valley Railroad as well as a number of nearby houses were used in filming of Hearts in Atlantis. In 1993, a portion of the Showtime production of Assault at West Point: The Court-Martial of Johnson Whittaker was filmed here. In the summer of 2006, some scenes for the movie Evan Almighty were also filmed in Staunton. Some scenes for Familiar Strangers were also filmed in Staunton in 2007.

Staunton is home to nearly 200 buildings designed by architect Thomas Jasper Collins (1844–1925), who worked in various styles during the Victorian era. His firm, T. J. Collins & Sons, is still in business.

The city was once home to about ten hotels, but only one of them is still in operation - the Stonewall Jackson Hotel. This hotel was renovated in the early 2000s, and is now in operation as both a hotel and a conference center. The Ingleside Resort is also still in operation. During World War II it was used by the INS as a detention center for enemy aliens held under Executive Order 9066. Some of the hotels that are no longer in operation are The Virginia Hotel, the Eakleton Hotel, the Valley Hotel, the American Hotel and the Hotel Beverley. All of these buildings are still standing except for the Virginia Hotel, which was demolished in 1930 to make way for a planned addition to the Stonewall Jackson Hotel which was never built. The New Street Parking Garage now stands on the site. Among the houses in Staunton on the National Register of Historic Places is The Oaks, at 437 East Beverley Street. An 1840s structure, it was modified and enlarged in 1888 by famed Civil War cartographer Jedediah Hotchkiss. Also on the National Register is "Waverley Hill", a Georgian revival house designed in 1929 by renowned architect William Bottomley with a landscape designed by Arthur Shurcliff.

All content from Kiddle encyclopedia articles (including the article images and facts) can be freely used under Attribution-ShareAlike license, unless stated otherwise. Cite this article:
Staunton, Virginia Facts for Kids. Kiddle Encyclopedia.