John Mercer Langston (December 14, 1829 – November 15, 1897) was an abolitionist, attorney, educator, activist, diplomat, and politician in the United States. An African American, he became the first dean of the law school at Howard University and helped create the department. He was the first president of what is now Virginia State University, a historically black college.

Born a free black in Virginia to a freedwoman of mixed race and a white planter father, in 1888 Langston was elected to the U.S. Congress as the first representative of color from Virginia. Joseph Hayne Rainey, the black Republican congressman from South Carolina, had been elected in 1870 during the Reconstruction era.

In the Jim Crow era of the later nineteenth century, Langston was one of only five African Americans elected to Congress from the South before the former Confederate states passed constitutions and electoral rules from 1890 to 1908 that essentially disenfranchised most blacks and many poor whites, excluding the blacks from politics. After that, no African Americans would be elected from the South until 1973, after the federal Voting Rights Act of 1965 was passed to enforce their constitutional rights.

Langston's early career was based in Ohio where, with his older brother Charles Henry Langston, he began his lifelong work for African-American freedom, education, equal rights and suffrage. In 1855 he was one of the first African Americans in the United States elected to public office when elected as a town clerk in Ohio. John was a great-uncle of the renowned poet Langston Hughes. 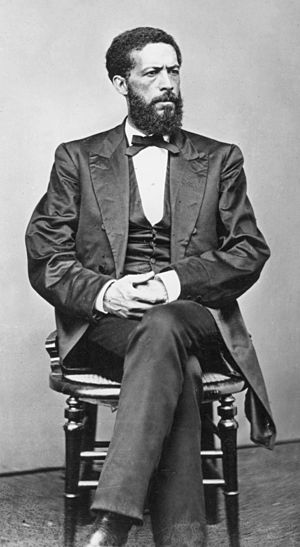 Together with his older brothers Gideon and Charles, John Langston became active in the abolitionist movement. He helped runaway slaves to escape to the North along the Ohio part of the Underground Railroad. In 1858 he and Charles partnered in leading the Ohio Anti-Slavery Society, with John acting as president and traveling to organize local units, and Charles managing as executive secretary in Cleveland.

In 1863 when the government approved founding of the United States Colored Troops, John Langston was appointed to recruit African Americans to fight for the Union Army. He enlisted hundreds of men for duty in the Massachusetts Fifty-fourth and Fifty-fifth regiments, in addition to 800 for Ohio's first black regiment. Even before the end of the war, Langston worked for issues of black suffrage and opportunity. He believed that black men's service in the war had earned their right to vote, and that it was fundamental to their creating an equal place in society. 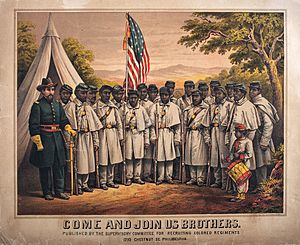 Come and Join Us Brothers, by the Supervisory Committee For Recruiting Colored Regiments

After the war, Langston was appointed inspector general for the Freedmen's Bureau, a Federal organization that assisted freed slaves and tried to oversee labor contracts. The Bureau also ran a bank and helped establish schools for freedmen and their children.

During 1870, Langston assisted Republican Senator Charles Sumner from Massachusetts with drafting the civil rights bill that was enacted as the Civil Rights Act of 1875. The 43rd Congress of the United States passed the bill in February 1875 and it was signed into law by President Ulysses S. Grant on March 1, 1875.

President Ulysses S. Grant appointed Langston a member of the Board of Health of the District of Columbia.

In 1877 President Rutherford Hayes appointed Langston as U.S. Minister to Haiti; he also served as chargé d'affaires to the Dominican Republic.

After his diplomatic service, in 1885 Langston returned to the US and Virginia. He was appointed by the state legislature as the first president of Virginia Normal and Collegiate Institute, a historically black college (HBCU) at Petersburg. There he also began to build his political base.

In 1890 Langston was named as a member of the board of trustees of St. Paul Normal and Industrial School, a historically black college, when it was incorporated by the Virginia General Assembly. In this period, he also wrote his autobiography, which he published in 1894.

The John Mercer Langston House in Oberlin, Ohio, has been designated as a National Historic Landmark.

John Mercer Langston Elementary School at 33 P Street NW in Washington, D.C. was named in his honor. It opened in 1902 as a school for black students and remained open until 1993. In 1997 the building served as a homeless shelter, but it has mostly sat empty since closing.

All content from Kiddle encyclopedia articles (including the article images and facts) can be freely used under Attribution-ShareAlike license, unless stated otherwise. Cite this article:
John Mercer Langston Facts for Kids. Kiddle Encyclopedia.