Fort A.P. Hill is a training and maneuver center belonging to the United States Army located near the town of Bowling Green, Virginia. The center focuses on arms training and is used by all branches of the US Armed Forces. It is named for Virginia native and Confederate Lieutenant General A. P. Hill. Fort A.P. Hill is one of the U.S. Army installations named for Confederate soldiers to be renamed by the Commission on the Naming of Items of the Department of Defense that Commemorate the Confederate States of America or Any Person Who Served Voluntarily with the Confederate States of America. 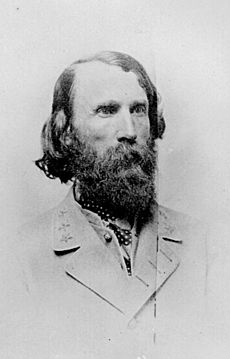 General A. P. Hill, after whom the fort is named

In the spring of 1940, the War Plans Division of the Army General Staff developed a plan to raise a national army of four million men that would allow it to conduct simultaneous operations in both the Pacific and Europe theaters. In July 1940, a movement began to locate an area of approximately 60,000 acres (240 km2), independent of any post, and lying somewhere between the Potomac River and the upper Chesapeake Bay.

Lieutenant Colonel Oliver Marston, an artillery officer stationed in Richmond, Virginia and acting as an agent of the Third Corps Area commander, made a detailed investigation of the Bowling Green, Virginia area in September 1940. He enthusiastically recommended that the War Department procure the Caroline County site. The result was a maneuver area that contained 77,332 acres (312.95 km2) and billeting space for 74 officers and 858 enlisted personnel.

Fort A.P. Hill was established as an army training facility on June 11, 1941, pursuant to War Department General Order No. 5. In its first year, the installation was used as a maneuver area for the II Corps and for three activated National Guard divisions from Mid-Atlantic states. In the autumn of 1942, Fort A.P. Hill was the staging area for the headquarters and corps troops of Major General George S. Patton’s Task Force A, which was part of the Western Task Force of the Allied invasion of French North Africa. During the early years of World War II, the post continued to be a training site for corps and division-sized units. Commencing in 1944, field training for Officer Candidate School and enlisted replacements from nearby Forts Lee, Eustis, and Belvoir was conducted.

During the Korean War, Fort A.P. Hill was designated as Camp A.P. Hill and was a major staging area for units deploying to Europe, including the VII Corps Headquarters and the Third Armored Cavalry Regiment. The fort was the major center for Engineer Officer Candidate School training (students from Fort Belvoir) during the Vietnam War.

Construction of the U.S. Army Ordnance Corps Explosive Ordnance Disposal training center was completed in July 2011 with the first day of class being October 17, 2011. It is named after Captain Jason McMahon, who died in Afghanistan in 2010. The center provides explosive ordnance disposal advanced technical training and tactical skills education for both officer and enlisted. 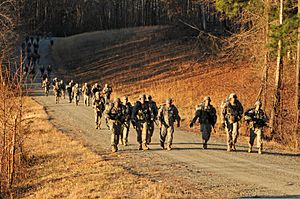 Soldiers participate in a road march at the fort in 2013.

It is used year-round for military training of both active and reserve troops of the U.S. Army, U.S. Navy, U.S. Marine Corps, and U.S. Air Force, as well as ROTC cadets and other government agencies including the Departments of State and Interior, U.S. Customs and Border Protection, and federal, state, and local security and law enforcement agencies. 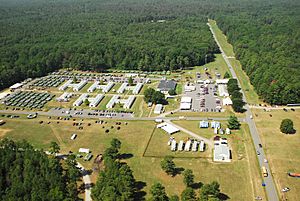 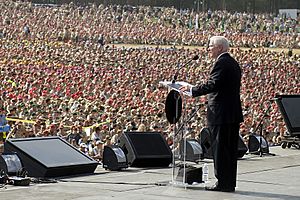 All content from Kiddle encyclopedia articles (including the article images and facts) can be freely used under Attribution-ShareAlike license, unless stated otherwise. Cite this article:
Fort A.P. Hill Facts for Kids. Kiddle Encyclopedia.