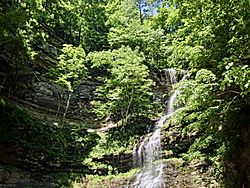 Fayette County is a county in the U.S. state of West Virginia. As of the 2010 census, the population was 46,039. Its county seat is Fayetteville. It is part of the Beckley, WV Metropolitan Statistical Area in Southern West Virginia.

Fayette County was created by Act of the Virginia General Assembly, passed February 28, 1831, from parts of Greenbrier, Kanawha, Nicholas, and Logan counties. It was named in honor of the Marquis de la Fayette, who had played a key role assisting the Continental Army during the American Revolutionary War. Virginia previously had a Fayette County, which was lost to form the new state of Kentucky. Accordingly, in the State records of Virginia, there will be listings for Fayette County from 1780–1792 and Fayette County from 1831-1863. Neither location is still located in Virginia and despite naming a county after him twice, Virginia no longer has a county named for the Marquis de la Fayette.

A substantial portion was subdivided from Fayette County to form Raleigh County in 1850. Fayette was one of 50 counties that broke off from the rest of Virginia and formed the new state of West Virginia during the American Civil War. In 1871, an Act of the West Virginia Legislature severed a small portion to form part of Summers County.

Fayette County was home to a disastrous mine explosion at Red Ash in March 1900, in which 46 miners were killed.

The county has a tradition of coal mining, which still serves as a primary source of employment in the area. A Georgia Pacific lumber mill has its home to the west of Mt. Hope, adjacent to U.S. Route 19. There exists a large metal alloy plant in Alloy. The Mount Olive Correctional Complex, West Virginia's only maximum security state prison, is also located in Fayette County. The economy has shifted significantly in recent years, with a large amount of money being spent in outdoor recreation and tourism.

All content from Kiddle encyclopedia articles (including the article images and facts) can be freely used under Attribution-ShareAlike license, unless stated otherwise. Cite this article:
Fayette County, West Virginia Facts for Kids. Kiddle Encyclopedia.