Thurmond is a town in Fayette County, West Virginia, United States, on the New River. The population was five at the 2010 census. During the heyday of coal mining in the New River Gorge, Thurmond was a prosperous town with a number of businesses and facilities for the Chesapeake and Ohio Railway. The town was the filming location for John Sayles' 1987 movie Matewan since it still possesses many of the characteristics of a 1920s Appalachian coal town.

Today, much of Thurmond is owned by the National Park Service for the New River Gorge National River. The C&O passenger railway depot in town was renovated in 1995 and now functions as a Park Service visitor center. The entire town is a designated historic district on the National Register of Historic Places.

Thurmond's level land is almost entirely consumed by CSX (formerly the Chesapeake and Ohio Railway) operations. Apart from a strip of commercial buildings that front directly onto the train tracks with no intervening street, the remainder of the town climbs the hill behind the bottomland. Thurmond was an important switching center for the C&O, a place where short trains from mines in the area were assembled into longer trains for shipment to markets on the main line.

According to the United States Census Bureau, the town has a total area of 0.09 square miles (0.23 km2), all land.

Thurmond was incorporated in 1900 and was most likely named for Captain W. D. Thurmond, who settled here in 1844. He served in the Confederate Army and died in 1910 at age 90. Thurmond post office was established in 1888 and discontinued in 1995. The community remained small until Thomas G McKell of Glen Jean negotiated with the Chesapeake and Ohio Railroad for a crossing at Dunloup Creek in 1892. 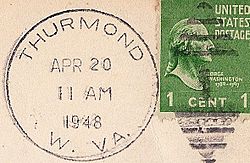 W. D. Thurmond banned alcohol from his lands, which comprised the originally incorporated portion of the town. However, the McKell family had no such scruples, and their Dun Glen Hotel on McKell land just to the east of the Thurmond land became notorious for hosting a fourteen-year-long card party claimed by Ripley's Believe It or Not to be the world's longest-lasting poker game.

There were two hotels in the town; one was called the Lafayette (known locally as the 'Lay-flat') which was close to the railroad, and the aforementioned 100-room Dun Glen, which opened in 1901, became a nationally known resort, and burned down in 1930, marking the beginning of a decline that saw Thurmond a virtual ghost town by the 1950s. The Thurmond National Bank (owned by Thurmond) closed in 1931 and the New River Bank (owned by the McKells) moved to Oak Hill in 1935.

The Thurmond Historic District comprises the entire town and a small portion of the opposite riverbank. Thurmond was accessible solely by rail until 1921. The town occupies a narrow stretch of flat land along the Chesapeake and Ohio Railroad track, with no road between the tracks and the town. Instead, a single-lane road crosses the New River on a single-track railroad bridge, crosses the main line, and climbs the hill behind the town so that it parallels the town 150 feet higher on the hill before dropping down next to the tracks. Due to its strategic position on the rail line, the commercial center thrived in spite of the absence of a road.

In the residential portion of the town, housing types are standardized, with three or four basic types corresponding to different positions in the railroad hierarchy. The commercial district, while lacking a street for much of its history, boasted two hotels, two banks, and a number of other commercial buildings. The railroad station was built in 1888, while a railyard and shops served the extensive branch line network which carried coal out of the hills.

The town once had a population of several hundred, which has dwindled to fewer than a dozen. The railroad depot is now a visitor center for New River Gorge National River. 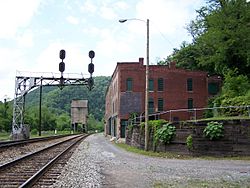 There were five households out of which none had children under the age of 18 living with them, one was a married couple living together, and four were non-families. Three households were made up of individuals and two had someone living alone who was 65 years of age or older. The average household size was 1.40 and the average family size was 2.00.

There were 4 households of which 100.0% were non-families. 75% of all households were made up of individuals and 50% had someone living alone who was 65 years of age or older. The average household size was 1.25 and the average family size was 0.00.

All content from Kiddle encyclopedia articles (including the article images and facts) can be freely used under Attribution-ShareAlike license, unless stated otherwise. Cite this article:
Thurmond, West Virginia Facts for Kids. Kiddle Encyclopedia.