Matewan is a town in Mingo County, West Virginia, United States at the confluence of the Tug Fork River and Mate Creek. The population was 499 at the 2010 census. The Norfolk Southern Railway's Pocahontas District passes through the town.

According to the United States Census Bureau, the town has a total area of 0.56 square miles (1.45 km2), all of it land. 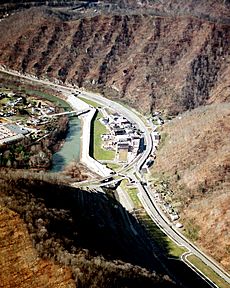 A section of the floodwall along the Tug Fork in Matewan, West Virginia, constructed by the U.S. Army Corps of Engineers, depicts the Hatfield-McCoy feud.

The town was named after Matteawan (now called Beacon), a town in Dutchess County, Upstate New York. Matteawan was the home town of Erskine Hazard, a civil engineer from the Norfolk and Western Railway who laid out the town in 1890 and drew up the first map of the new community. Local residents, however, changed the spelling and pronunciation.

Attempts to unionize by coal miners in 1920 led to the Battle of Matewan between miners and Baldwin–Felts detectives, which was the inspiration for the 1987 movie Matewan. The town's history is on display at the town's Web site, which has a small museum.

Because of its rich history (Hatfield–McCoy feud and Matewan Massacre), the center of the town was designated the Matewan Historic District, a National Historic Landmark. Interesting sights and tours can be had while visiting the town.

The Hatfield–McCoy Trails opened a trail head in Matewan. Trail Riders can now easily access the trail system while staying in town.

All content from Kiddle encyclopedia articles (including the article images and facts) can be freely used under Attribution-ShareAlike license, unless stated otherwise. Cite this article:
Matewan, West Virginia Facts for Kids. Kiddle Encyclopedia.