Fayetteville is a town in and the county seat of Fayette County, West Virginia, United States. The population was 2,892 at the 2010 census.

Fayetteville was listed as one of the 2006 "Top 10 Coolest Small Towns in America" by Budget Travel Magazine, and as "Best River Town 2013" by Blue Ridge Outdoors magazine.

Fayetteville was founded by Abraham Vandal, a Revolutionary War veteran and local farmer. The town was originally named Vandalia. The Fayette County Courthouse is located on part of the original Vandal farm. The town’s name was later (prior to 1837) changed to Fayetteville after the Revolutionary War hero, Marquis de Lafayette who toured the US in 1824/25.

During the Civil War, the majority of the people in Fayetteville were in sympathy with the Southern cause. Fayetteville changed hands several times during the war and was partially destroyed during the fighting.

In 1897, the Fayette County Courthouse was completed and is a remarkable example of the Romanesque Revival architectural style. The Altamont Hotel was built the same year. Both are listed on the National Register of Historic Places, along with the E. B. Hawkins House. The Fayetteville Historic District was designated in 1990.

Fayetteville grew rapidly in the late 19th century thanks mainly to the coal industry. The mining industry declined in the late 20th century. Fayetteville’s economy now is almost completely based on the tourism industry. Popular activities include white water rafting, fishing, mountain biking, and rock climbing in the region. Also, the New River Gorge Bridge hosts annual celebration, "Bridge Day," which is held on the third Saturday of October.

The New River Gorge Bridge is the longest arch bridge in the western hemisphere; its creation made traveling on US 19 much easier, turning a 45-minute sojourn from one side of the gorge to the other into a roughly 45-second jaunt. The New River is one of the five oldest major rivers in the world. 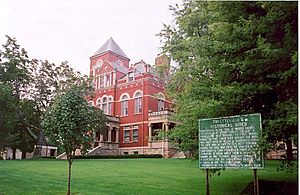 All content from Kiddle encyclopedia articles (including the article images and facts) can be freely used under Attribution-ShareAlike license, unless stated otherwise. Cite this article:
Fayetteville, West Virginia Facts for Kids. Kiddle Encyclopedia.