Ansted is a town in Fayette County in the U.S. state of West Virginia. The population was 1,404 at the 2010 census. It is situated on high bluffs along U.S. Route 60 on a portion of the Midland Trail a National Scenic Byway near Hawks Nest overlooking the New River far below.

The area of what is now southern West Virginia was long a hunting ground for nomadic tribes of Native-Americans before the arrival of Europeans in the 17th century. Around 1790, the area now known as Ansted was settled by a group of Baptists who did not hold legal title to the land. These people were known as "squatters," and built the Hopewell Baptist Church nearby. In 1792, a 400-acre (1.6 km²) tract of land in the area was patented to Charles Skaggs.

Named in honor of the Marquis de la Fayette, a major hero of the American Revolutionary War, Fayette County, Virginia was created in 1831. The first county court was held that same year at Miles Manser's general store which stood nearby Ansted's current location along the James River and Kanawha Turnpike, an early roadway built to connect the canals on the James and Kanawha Rivers. The area was known at that time as Mountain Cove. At various times, it has also been known as Woodville, New Haven, and Westlake.

During the American Civil War, the area of Fayette County was a focus of both Union and Confederate efforts. The burning of Gauley Bridge was a spectacular event long-remembered in the community. During the winter of 1861-62, the Chicago Gray Dragoons of the Union Army were based at the Halfway House (Tyree Tavern) in what is now Ansted. At this time, Confederate General Robert E. Lee maintained headquarters on nearby Sewell Mountain. The Chicago Dragoons had a strong religious orientation and ties to the Young Men's Christian Association (YMCA) of Chicago. Many Union troops felt they were fighting the moral issue of slavery while although many citizens of Fayette County were more sympathetic to the "states rights" issues of the Confederacy. The area became part of the new State of West Virginia when it was formed in 1863 as part of the Union. Local lore speaks of romances between the local girls and the young soldiers from Illinois. Some of these young couples married and built homes and raised their families in the Mountain State at the end of hostilities. It is also the burial site of Stonewall Jackson's mother, Julia Neale Jackson in Westlake Cemetery.

After the Civil War, the United States renewed its westward expansion. Around 1872, the new Chesapeake & Ohio Railway was built along both sides of the narrow New River valley nearby creating a through route to the Ohio and Mississippi Rivers. Hawk's Nest Station, just below Ansted, was the site of the final spike in this portion of the C&O on January 29, 1873.

Also in 1873, the town of Ansted was created. It was named after a British scientist and geologist, Dr. David T. Ansted (1814–1880), who in 1853, mapped out the nearby seams of high grade bituminous coal and once owned the land the town now occupies. The town was laid out by former Confederate Colonel George W. Imboden, a wealthy lawyer.

In the period following the Civil War, Imboden began speculating in coal lands in southern West Virginia and attracted British capitalists interested in investing. Dr. Ansted, a noted geologist, had been engaged to investigate the region's potential for coal deposits, and his report far exceeded Imboden's best expectations. Ansted and Imboden bought more than a thousand acres (4 km²) of coal and timber land on Gauley Mountain between Hawks Nest and the town of Westlake, which became the present-day town of Ansted. They organized the Gauley-Kanawha Coal Company, Ltd., in 1872 and in 1873 opened a mine about 1,000 feet (300 m) above the river and 300 feet (91 m) below the summit of Gauley Mountain. The company changed its name to Hawk's Nest Coal Company, Ltd., in 1875, and was reorganized in bankruptcy in 1889 as the Gauley Mountain Coal Company.

Imboden's second wife, Angie, renamed their family home "Contentment" because she and her family spent many happy hours there. Contentment had been built about 1830 on the James River and Kanawha Turnpike in the west end of what is now Ansted, and they acquired it in 1872. Colonel Imboden, who was Ansted's first mayor, helped stimulate the growth of the town's businesses.

Another of the town's more well-known residents was a protégé of Dr. Ansted, William Nelson Page, (1854–1932). A civil engineer and mining manager, he was one of the energetic and successful men who helped develop West Virginia's rich bituminous coal fields in the late 19th and early 20th century. Page was co-founder and builder of the Virginian Railway. In 1898, on a knoll in the middle of town, Page had a palatial mansion built by Gauley Mountain Coal Company carpenters, where he and his wife Emma Gilham Page raised their four children. Like Colonel Imboden, William Page also served as a mayor of Ansted for 10 years, although his title of "Colonel" was honorific and did not result from technically attaining that rank in military service, although he was active in the West Virginia State Militia. The railroad towns of Page and Pageton in West Virginia were named for him.

Ansted had railroad service from 1874 until 1972. In 1874, mine owners had a narrow-gauge railroad built from Hawk's Nest Station up the ravine of Mill Creek. A [[Tank locomotive The (C&O) operated the new branch line, which was known as the Hawks Nest Subdivision from 1890 until 1972. It connected with the New River Subdivision main line at Hawks Nest Station and consisted of 3.44 miles (5.54 km) of line to and beyond the town of Ansted. The line had one of the steepest grades of any C&O branch, a 4.17% grade. C & O did not desire to transport passengers on the line, but was ordered to do so by the State of West Virginia. Passenger service was finally operated on the branch line following a decision of the United States Supreme Court in Chesapeake & Ohio Railway Company v. Public Service Commission of State of West Virginia, 242 U.S. 603 (1917), and continued until sometime in the 1930s. The freight rail service on the branch line ended in 1972 and the tracks were removed.

Today, the Ansted-Hawks Nest Rail Trail follows the route from the Town of Ansted down the steep mountainside to the area of Hawks Nest Station in the New River Valley. The trail is 2.2 miles (3.5 km) in length and terminates where the aerial tram from Hawks Nest Lodge departs their passengers. 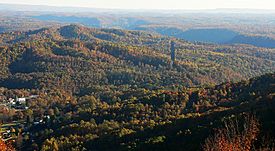 The mansion of William and Emma Page and their family on the hilltop in Ansted also still stands as evidence of the once-thriving coal business. Later occupied by the family of Dr. Gene Vawter, and still in use as a private residence, the Page-Vawter House is listed on the National Register of Historic Places.

Other historical landmarks include the Halfway House, the former Tyree's Tavern which was headquarters of the Chicago Gray Dragoons during the American Civil War, and the African American Heritage Family-Tree Museum, which helps African-Americans trace their roots.

The grave of Julia Neale Jackson, mother of Confederate General Thomas Stonewall Jackson, is located in Westlake Cemetery in Ansted. The marker was placed more than 35 years after her death by Captain Thomas R. Ranson, one of the soldiers of the Stonewall Brigade, an act considered symbolic of the affection of his troops for their fallen leader.

Ansted has the distinction of having Hawk's Nest State Park located within its borders. The park at Hawk's Nest features a small museum and gift shop, an aerial tram ride to the New River Gorge, and spectacular overlooks including the famous "Lover's Leap".

U.S. Route 60 threads through the community as part of the Midland Trail, a National Scenic Byway.

A war memorial was erected in 2007 through donations that has the name, rank, and period served of military veterans

There were 589 households, of which 26.1% had children under the age of 18 living with them, 49.1% were married couples living together, 13.8% had a female householder with no husband present, 4.2% had a male householder with no wife present, and 32.9% were non-families. 30.1% of all households were made up of individuals, and 16.3% had someone living alone who was 65 years of age or older. The average household size was 2.29 and the average family size was 2.80.

All content from Kiddle encyclopedia articles (including the article images and facts) can be freely used under Attribution-ShareAlike license, unless stated otherwise. Cite this article:
Ansted, West Virginia Facts for Kids. Kiddle Encyclopedia.