Military base facts for kids 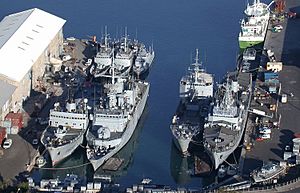 A military base is where a country keeps its armed forces. It could be an air base, an army base, or a navy base. It could be inside its home country, in a different, friendly country, or in a country being invaded or occupied.

The name used generally refers to the type of military that uses the base.

A military base may go different names, such as the following:

All content from Kiddle encyclopedia articles (including the article images and facts) can be freely used under Attribution-ShareAlike license, unless stated otherwise. Cite this article:
Military base Facts for Kids. Kiddle Encyclopedia.