Fort Jefferson is a massive but unfinished coastal fortress. It is the largest brick masonry structure in the Americas, and is composed of over 16 million bricks. Among United States forts, only Fort Monroe in Virginia and Fort Adams in Rhode Island are larger. The fort is located on Garden Key in the lower Florida Keys within the Dry Tortugas National Park, about 70 miles (110 km) west of the island of Key West. The Dry Tortugas are part of Monroe County, Florida, United States. 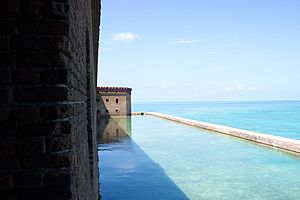 In late December 1824 and early January 1825, about five years after Spain sold Florida to the United States for $5 million, U.S. Navy Commodore David Porter inspected the Dry Tortugas islands. He was on the lookout for a site for a naval station that would help suppress piracy in the Caribbean. Unimpressed with what he saw, he notified the Secretary of the Navy that the Dry Tortugas were unfit for any kind of naval establishment. He reported that they consist of small sand islands a little above the surface of the ocean, have no fresh water, scarcely enough land to place a fortification, and in any case are probably not solid enough to bear one.

While Commodore Porter thought the Dry Tortugas were unfit for a naval station, others in the U.S. government thought the islands were a good location for a lighthouse to guide ships around the area's reefs and small islands. A small island called Bush Key, later called Garden Key, was selected as the site for the lighthouse, which became known as Garden Key Light. Construction began in 1825 and was completed in 1826. The 65-foot lighthouse was constructed of brick with a whitewashed exterior. A small white cottage for the lighthouse keeper was constructed beside the lighthouse.

In 1829, under recommendations from Commodore John Rodgers, the USS Florida stopped at the Dry Tortugas to evaluate the anchorage. Contrary to Commodore Porter's experience, Josiah Tattnall was delighted with what he found. The Dry Tortugas, he reported, consisted of 11 small keys and surrounding reefs and banks, over which the sea broke. There was an outer and an inner harbor. The former afforded a safe anchorage at all seasons, and was large enough to let a large number of ships ride at anchor. Of more importance, the inner harbor combined a sufficient depth of water for ships-of-the-line, with a narrow entrance of not more than 120 yards. Tattnall noted that if a hostile power should occupy the Dry Tortugas, United States shipping in the Gulf would be in deadly peril, and nothing but absolute naval superiority could prevail. However, if occupied and fortified by the U.S., the Dry Tortugas would constitute the advance post for a defense of the Gulf Coast. Capt. John G. Barnard then made a detailed reconnaissance in Nov. 1844 and on 17 Sept. 1845, the Dry Tortugas became a national military reservation. 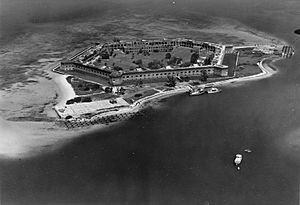 Construction of Fort Jefferson (named after the third President, Thomas Jefferson) was finally begun on Garden Key in Dec. 1846, under the supervision of 2nd Lt. Horatio Wright, after plans drawn up by Lt. Montgomery C. Meigs were approved in Nov. Meigs' plans were based on a design by Joseph Totten Chief of Engineers Totten eventually visited the fort in 1855, accompanying Louis Agassiz.

The new fort would be built so that the existing Garden Key lighthouse and the lighthouse keeper's cottage would be contained within the walls of the fort. The lighthouse would continue to serve a vital function in guiding ships through the waters of the Dry Tortugas Islands until the current metal light tower was installed atop an adjacent wall of the fort in 1876. The original brick lighthouse tower was taken down in 1877. 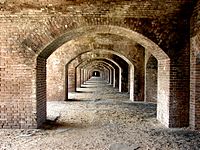 Lower archways of one interior side of Fort Jefferson. Many of the arches were designed by Capt. Daniel P. Woodbury, Superintending Engineer from 1856-1860.

The design called for a two-tiered casemates in a six-sided outline, with two Curtain walls measuring 325 feet, and the other four measuring 477 feet. Corner bastions, which are large projections designed to allow defensive fire along the faces of the walls they joined, contained gunrooms, gunpowder magazines and a granite Spiral staircase. Each tier of casemates contained 150 guns, and another 150 were placed on top of the fort itself. The heavy guns were mounted inside the walls in a string of open casemates, or gunrooms, facing outward toward the sea through large openings called embrasures. The 13 acre parade ground contained additional powder magazines, headquarters, a hospital, officer quarters and three large barracks. 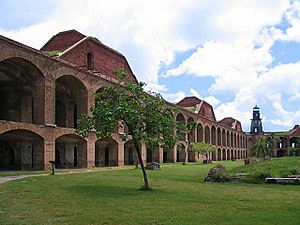 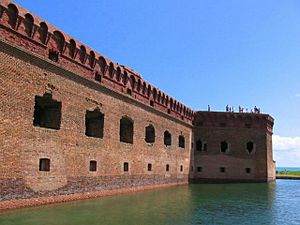 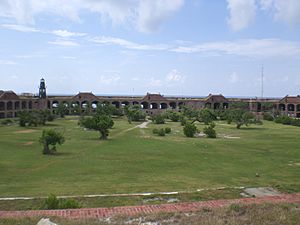 The Army employed civilian carpenters, masons, general laborers, and Key West slaves to help construct the fort. By Aug. 1855, 233 white contract laborers were employed though the slaves "...were the backbone of the labor gang,,,", according to Albert Manucy. Bricks were provided by the Pensacola firm of Raiford and Abercrombie. In 1859, the scientist Joseph Bassett Holder assumed responsibility as the fort's physician.

In order to support such a large population in an area lacking fresh water, an innovative system of cisterns was built into the walls of the fort. Sand-filled columns were placed at regular intervals in the inner walls, spanning their height from the roof to the foundation. The columns were intended to filter rainwater from the rooftop for long-term storage in a series of underground chambers. However, the rainwater dissolved salts in the sand, or the cisterns had not been made tight, making the water unfit for drinking, but usable for washing and cooking. Only the rainwater runoff stored under the parade field was fresh for drinking. Two steam condensers distilled 7,000 gallons of sea water per day during the Civil War. The fort enjoyed, "...much better water than we have had heretofore," and was stored in the parade ground cisterns.

At the onset of the Civil War, 62 men of the Second U.S. Artillery Regiment, under the command of Major Lewis Golding Arnold, were moved to the fort, preventing it from falling into the hands of rebel forces. Capt. Meigs took over as the Superintending Engineer in 1860, and worked feverishly to improve the security and defenses so that the fort's heavy guns were first fired on 26 Jan. 1861. The fort had a population of 168 persons at the time, including women and children.

In Sept. 1861, the first prisoner soldiers appeared, those sentenced by Courts-martial to confinement and hard labor for acts such as mutinous conduct. President Lincoln then substituted imprisonment on the Dry Tortugas, in lieu of execution, for those found guilty of desertion. By June 1863, only 22 black workers remained following the Emancipation Proclamation. By Nov. 1863, the number of military convicts reached 214, meeting the demands for unskilled labor, and the ratio of soldier to prisoners was about four to one. In June 1864, the ratio was almost equal, with 653 soldiers and 753 convicts. In Nov. 1864, only 583 soldiers guarded 882 prisoners and 8 were able to escape.

However, on 24 July 1865 four special civilian prisoners arrived. These were Dr. Samuel Mudd, Edmund Spangler, Samuel Arnold, and Michael O'Laughlen, who had been convicted of conspiracy in the assassination of President Abraham Lincoln. Mudd attempted to stowaway on a steam transport, when the 82nd U.S. Colored Troops relieved the 161st New York Volunteer Infantry Regiment on 25 Sept. 1865. This led to his detention in the fort's "dungeon", over which were the words "Whoso entereth here leaveth all hope behind." Another state prisoner, Col. George St. Leger Grenfell arrived on 8 Oct. 1865.

Mudd helped provide medical care during a yellow fever epidemic at the fort in 1867. The epidemic killed many prisoners, including O'Laughlen and Dr. (Brevet Major) Joseph Sim Smith, the 5th Artillery's surgeon. A monument to Dr. Smith and his son is still present on the parade grounds. Mudd, Arnold, and Spangler were pardoned by President Andrew Johnson and released.

The seawall was finally completed in 1872 and six 15-inch Rodman guns were in place on barbette (third) tier.

Frequent hurricanes and yellow fever epidemics convinced the War Department to remove the garrison, leaving a small caretaker force for the armaments and ammunition in 1874. In 1889, the Army turned the fort over to the Marine Hospital Service to be operated as a quarantine station. The U.S. Navy used the Key as a coaling station. One of the ships to load coal there was the USS Maine before her fateful trip to Havanna. During WWI, the lighthouse was decommissioned, but a wireless station and naval seaplane facility was operational.

On January 4, 1935, President Franklin D. Roosevelt, designated the area as Fort Jefferson National Monument. It was listed on the National Register of Historic Places on November 10, 1970.

On October 26, 1992 the Dry Tortugas, including Fort Jefferson, was established as a National Park.

Fort Jefferson can be reached by a daily ferry from Key West, as well as by chartered seaplane and private yacht. As a national park, primitive camping is permitted on the beach. Visitors by ferry typically spend 4 hours on the island, which is enough time for a guided tour of the fort, lunch on the boat, and a swim (snorkel equipment provided) on the reef. Within the fort is a museum, and bookstore, but no food or drink are available for purchase.

Use in film and literature

All content from Kiddle encyclopedia articles (including the article images and facts) can be freely used under Attribution-ShareAlike license, unless stated otherwise. Cite this article:
Fort Jefferson (Florida) Facts for Kids. Kiddle Encyclopedia.