List of national parks of the United States facts for kids 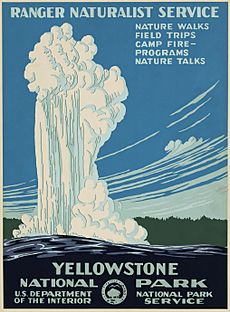 The United States has 63 protected areas known as national parks that are operated by the National Park Service, an agency of the Department of the Interior. National parks must be established by an act of the United States Congress. A bill creating the first national park, Yellowstone, was signed into law by President Ulysses S. Grant in 1872, followed by Mackinac National Park in 1875 (decommissioned in 1895), and then Rock Creek Park (later merged into National Capital Parks), Sequoia and Yosemite in 1890. The Organic Act of 1916 created the National Park Service "to conserve the scenery and the natural and historic objects and wildlife therein, and to provide for the enjoyment of the same in such manner and by such means as will leave them unimpaired for the enjoyment of future generations."

Thirty states have national parks, as do the territories of American Samoa and the U.S. Virgin Islands. California has the most with nine, followed by Alaska with eight, Utah with five, and Colorado with four. The largest national park is Wrangell–St. Elias in Alaska: at over 8 million acres (32,375 km2), it is larger than each of the nine smallest states. The next three largest parks are also in Alaska. The smallest park is Gateway Arch National Park, Missouri, at 192.83 acres (0.7804 km2). The total area protected by national parks is approximately 52.2 million acres (211,000 km2), for an average of 829 thousand acres (3,350 km2) but a median of only 208 thousand acres (840 km2).

The national parks set a visitation record in 2017, with more than 84 million visitors and set a further record in 2018 with a 0.1% increase. The most-visited national park is Great Smoky Mountains National Park in North Carolina and Tennessee, with over 11.3 million visitors in 2017, followed by Arizona's Grand Canyon National Park, with over 6.2 million. In contrast, only 11,177 people visited the remote Gates of the Arctic National Park and Preserve in Alaska in the same year.

Territories are set in italics.

All content from Kiddle encyclopedia articles (including the article images and facts) can be freely used under Attribution-ShareAlike license, unless stated otherwise. Cite this article:
List of national parks of the United States Facts for Kids. Kiddle Encyclopedia.