The Kobuk River (also Kooak, Kowak, Kubuk, Kuvuk, or Putnam) is a river located in the Arctic region of northwestern Alaska in the United States. It is approximately 280 miles (451 km) long. Draining a basin with an area of 12,300 square miles (32,000 km2), the Kobuk River is among the largest rivers in northwest Alaska with widths of up to 1500 feet (460 m) and flow at a speed of 3–5 miles per hour (5–8 km per hour) in its lower and middle reaches.

The river contains an exceptional population of sheefish, a large predatory whitefish within the salmon family, found throughout the Arctic that spawns in the river's upper reaches during the autumn. A portion of the vast Western Arctic Caribou Herd utilize the Kobuk river valley as winter range. 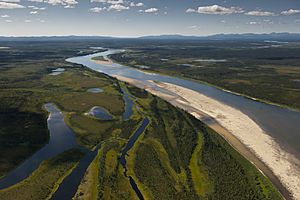 The Kobuk's Inuit name means "big river". Native peoples have hunted, fished, and lived along the Kobuk for at least 12,500 years and it has long been an important transportation route for inland peoples. In 1898 the river was the scene of a brief gold rush called the Kobuk River Stampede, which involved about 2,000 prospectors in total. Hearing of gold along the Kobuk and its tributaries, miners set out from Seattle and San Francisco on ships to reach the mouth of the Kobuk.

Upon arrival they were informed by native people that it was a scam, and only about 800 traveled upriver. The result was that little or no gold was found, and only on a few tributaries of the river. In 1980 the United States Congress designated 110 miles (177 km) of the river downstream from Walker Lake as the Kobuk Wild and Scenic River as part of the National Wild and Scenic Rivers System. The river is considered an outstanding destination for recreational floating.

All content from Kiddle encyclopedia articles (including the article images and facts) can be freely used under Attribution-ShareAlike license, unless stated otherwise. Cite this article:
Kobuk River Facts for Kids. Kiddle Encyclopedia.