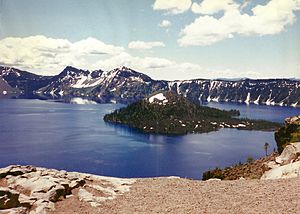 Crater Lake and Wizard Island in 1997

Wizard Island is a volcanic cinder cone which forms an island at the west end of Crater Lake in Crater Lake National Park, Oregon. The top of the island reaches 6,933 feet (2,113 m) above sea level, about 755 feet (230 m) above the average surface of the lake. 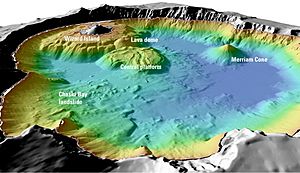 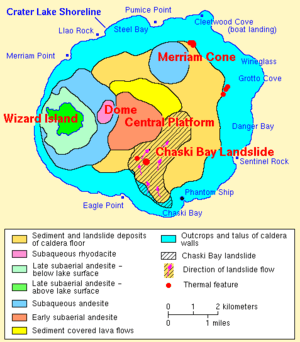 Geologic map of Wizard Island and the lake floor

Wizard Island was created after Mount Mazama, a large complex volcano, erupted violently approximately 7,700 years ago, forming its caldera which now contains Crater Lake. Following the cataclysmic caldera-forming eruption, which left a hole about 4,000 feet (1,200 m) deep where the mountain had once stood, a series of smaller eruptions over the next several hundred years formed several cinder cones on the caldera floor. The highest of these cones, the only one to rise above the current lake level, is Wizard Island, which rises over 2,700 feet (820 m) above the lowest point on the caldera floor and the deepest point in the lake.

Another large cinder cone, Merriam Cone, is in the northeast part of the lake. Although Merriam Cone rises about 1,400 feet (430 m) above the caldera floor, its summit is still 505 feet (154 m) below the average lake level. Its surface features and lack of a crater indicate that Merriam Cone formed under water. 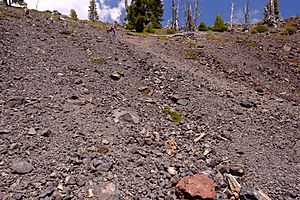 Current public access to Wizard Island is available only during the summer months when boat tours on Crater Lake are in operation. The tours depart from Cleetwood Cove at the north end of the lake, and circle the lake in the counterclockwise direction, stopping at a dock at Governors Bay on the south side of Wizard Island.

Two hiking trails are available on Wizard Island, one of which switchbacks up the flanks of the cone and circles the crater on top while the other trail meanders from the dock towards the western end of the island.

Panoramic view of the volcanic crater of Wizard Island, seen from the rim

All content from Kiddle encyclopedia articles (including the article images and facts) can be freely used under Attribution-ShareAlike license, unless stated otherwise. Cite this article:
Wizard Island Facts for Kids. Kiddle Encyclopedia.