The lake is 1,949 feet (594 m) deep at its deepest point, which makes it the deepest lake in the United States, the second-deepest in North America and the ninth-deepest in the world. The impressive average depth of this volcanic lake is due to the nearly symmetrical 4,000-foot-deep (1,200 m) caldera formed 7,700 years ago during the violent climactic eruptions and subsequent collapse of Mount Mazama and the relatively moist climate that is typical of the crest of the Cascade Range.

Crater Lake has no streams flowing into or out of it. All water that enters the lake is eventually lost from evaporation or subsurface seepage. The lake's water commonly has a striking blue hue, and the lake is re-filled entirely from direct precipitation in the form of snow and rain. 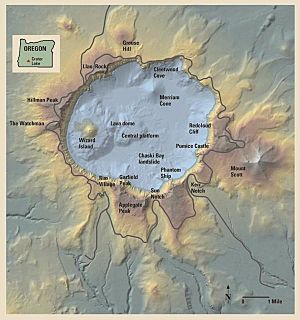 Volcanic activity in this area is fed by subduction off the coast of Oregon as the Juan de Fuca Plate slips below the North American Plate (see plate tectonics). Heat and compression generated by this movement has created a mountain chain topped by a series of volcanoes, which together are called the Cascade Range. The large volcanoes in the range are called the High Cascades. However, there are many other volcanoes in the range as well, most of which are much smaller.

About 400,000 years ago, Mount Mazama began its existence in much the same way as the other mountains of the High Cascades. As the young stratovolcano grew, many smaller volcanoes and volcanic vents were built in the area of the park and just outside what are now the park's borders.

After a period of dormancy, Mazama became active again. Then, around 5700 BC, Mazama collapsed into itself during a tremendous volcanic eruption, losing 2,500 to 3,500 feet (760 to 1,070 m) in height. The eruption formed a large caldera that was filled in about 740 years, forming a beautiful lake with a deep blue hue, known today as Crater Lake.

The eruptive period that decapitated Mazama also laid waste to much of the greater Crater Lake area and deposited ash as far east as the northwest corner of what is now Yellowstone National Park, as far south as central Nevada, and as far north as southern British Columbia. It produced more than 150 times as much ash as the May 18, 1980 eruption of Mount St. Helens. 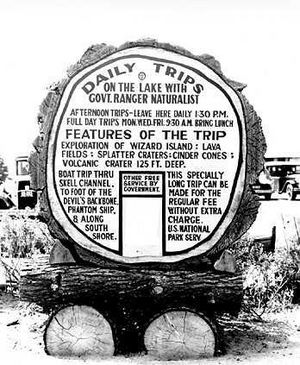 There are many hiking trails and several campgrounds inside the park. Unlicensed fishing is allowed without any limitation of size, species, or number. The lake is believed to have no indigenous fish, but several species of fish were introduced beginning in 1888 until all fish stocking ended in 1941. Kokanee salmon (Oncorhynchus nerka) and rainbow trout (Oncorhynchus mykiss) now thrive and reproduce here naturally.

Swimming is allowed in the lake, and the boat tours, which stop at Wizard Island, a cinder cone inside the lake, operate daily during the summer. All lake access for people is from Cleetwood Trail, a steep walking trail, and there are no roads for cars, trucks, or wagons that lead to the waterfront. All of the boats in the lake were delivered by helicopter.

Numerous observation points along the caldera rim for the lake are readily accessible by automobile via the "Rim Drive", which is 33 miles (53 km) long and has an elevation gain of 3,800 feet (1,200 m).

All content from Kiddle encyclopedia articles (including the article images and facts) can be freely used under Attribution-ShareAlike license, unless stated otherwise. Cite this article:
Crater Lake National Park Facts for Kids. Kiddle Encyclopedia.