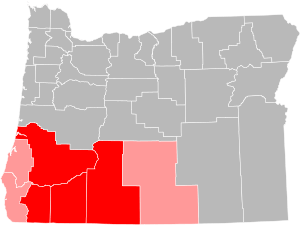 Southern Oregon is a region of the U.S. state of Oregon south of Lane County and generally west of the Cascade Range, excluding the southern Oregon Coast. Counties include Douglas, Jackson, Klamath, and Josephine. It includes the Southern Oregon American Viticultural Area, which consists of the Umpqua and Rogue River drainages. As of 2015, the population in the four counties is about 471,000, and in the greater, seven-county definition is about 564,000.

All content from Kiddle encyclopedia articles (including the article images and facts) can be freely used under Attribution-ShareAlike license, unless stated otherwise. Cite this article:
Southern Oregon Facts for Kids. Kiddle Encyclopedia.