Grants Pass is a city in, and the county seat of, Josephine County, Oregon, United States. The city is located on Interstate 5, northwest of Medford. Attractions include the Rogue River, famous for its rafting, and the nearby Oregon Caves National Monument located 30 miles (48 km) south of the city. Grants Pass is 256 miles (412 km) south of Portland, the largest city in Oregon. The population was 34,533 at the 2010 census.

Early Hudson's Bay Company hunters and trappers, following the Siskiyou Trail, passed through the site beginning in the 1820s. In the late 1840s, settlers (mostly American) following the Applegate Trail began traveling through the area on their way to the Willamette Valley. The city states that the name was selected to honor General Ulysses S. Grant's success at Vicksburg. Grants Pass post office was established on March 22, 1865. The city of Grants Pass was incorporated in 1887.

The Oregon-Utah Sugar Company (financed by Charles W. Nibley) was created, leading to a sugar beet factory being built in Grants Pass in 1916. Before the factory opened, Oregon-Utah Sugar was merged into the Utah-Idaho Sugar Company. Due to labor shortages and low acreage planted in sugar beets, the processing machinery was moved to Toppenish, Washington in 1918 or 1919. 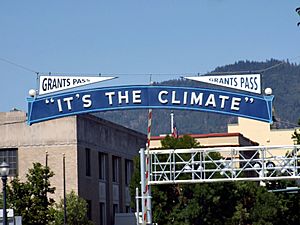 Summer days are sunny, dry and hot but it cools down dramatically at night; the average August high temperature is 88.8 °F or 31.6 °C but the low is only 53.7 °F or 12.1 °C. Winters are cool and fairly rainy with only occasional snow; the average January high temperature is 46.6 °F or 8.1 °C and the low, 35.1 °F or 1.7 °C. Grants Pass receives roughly 31 inches or 790 millimetres precipitation per year, with three-quarters of it occurring between November 1 and March 31. The mild winters and dry summers support a native vegetation structure quite different from the rest of Oregon, dominated by madrone, deciduous and evergreen oak, manzanita, pine, bush chinquapin, and other species that are far less abundant further north.

There were 14,313 households of which 30.7% had children under the age of 18 living with them, 41.3% were married couples living together, 14.5% had a female householder with no husband present, 4.9% had a male householder with no wife present, and 39.2% were non-families. 32.8% of all households were made up of individuals and 16.3% had someone living alone who was 65 years of age or older. The average household size was 2.34 and the average family size was 2.94.

There were 9,376 households out of which 31.1% had children under the age of 18 living with them, 44.5% were married couples living together, 14.5% had a female householder with no husband present, and 36.8% were non-families. 31.2% of all households were made up of individuals and 16.0% had someone living alone who was 65 years of age or older. The average household size was 2.36 and the average family size was 2.94. 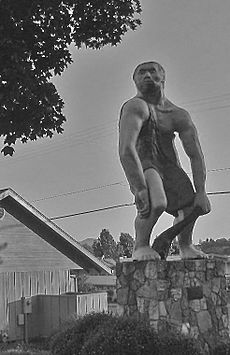 Caveman statue next to the visitor center 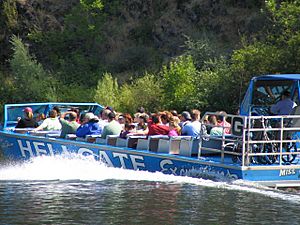 Jetboat on the Rogue River at Grants Pass

Boatnik, a speedboat race and carnival event, is held every Memorial Day weekend in Riverside Park.

Year round, there are First Friday Art Nights. On the first Friday of every month, many of the city's downtown stores hold art shows and promotional events.

The Grants Pass post office contains two tempera murals done through the U.S. Treasury Department Section on Fine Arts (often mistakenly referred to as the "WPA"), both painted in 1938. There are ten government-sponsored New Deal era murals in Oregon; Grants Pass is the only post office that contains two. The murals are "Rogue River Indians" by Louis DeMott Bunce (who also did a 1959 mural at Portland International Airport) and "Early and Contemporary Industries" by Eric Lamade.

Grants Pass has numerous and diverse parks and green spaces. Notable city-run parks include Riverside Park, summer home to the local Concerts in the Park series, and the Reinhart Volunteer Park, a park largely built through the efforts of community volunteers and featuring facilities for many sports.

All content from Kiddle encyclopedia articles (including the article images and facts) can be freely used under Attribution-ShareAlike license, unless stated otherwise. Cite this article:
Grants Pass, Oregon Facts for Kids. Kiddle Encyclopedia.