The valley forms a relatively isolated enclave west of the Cascade Range along the north side of the Siskiyou Mountains. It is separated from the nearby coast by a high section of the Southern Oregon Coast Range. The valley is characterized by a mild climate that allows a long growing season, especially for many varieties of fruits, nuts and herbs. A regional manufacturing industry is centered in Medford, the most highly populated area of the valley. In recent years the valley has emerged as a wine-growing region and it is the location of the Rogue Valley AVA (American Viticultural Area). The mild climate and relative isolation have made the valley a popular retirement destination. The community of Ashland is famous for the Oregon Shakespeare Festival. Interstate 5 follows the valley through Ashland and Medford. 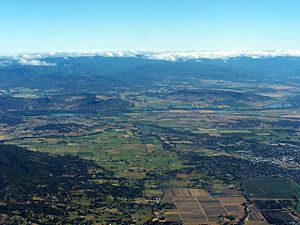 In the early 19th century the first European Americans began to pass through the valley, inhabited by the Shasta, Takelma, and Rogue River Athabaskan tribes of Native Americans. The early fur traders named this river the "River of the Rogues". White settlers began to arrive in the valley after the Donation Land Act, which allocated 640 acres (2.6 km2) of land to each married couple. Between 1836 and 1856, the valley was the scene of a series of bloody conflicts between European Americans and the Rogue River tribes. In 1850 gold was discovered on the Rogue River and the next year in the nearby mountains. Early mining activity was centered on the lower Rogue River, on Althouse Creek in Josephine County, and on the now-restored town of Jacksonville, west of Medford. During the gold rush some $70 million was extracted from the area. 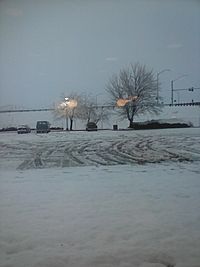 Unlike most of the rest of the state, because of the rain shadow effect resulting from the close range of the Cascades and Siskiyous, the Rogue Valley is relatively dry when compared to the coast and Portland. The region's climate is similar to the Central and Sacramento Valleys of California, with a hot-summer Mediterranean climate. Winters are chilly and rainy, but relatively dry and slightly colder when compared to the rest of western Oregon, with frequent fog, and occasional snow. Summers are hot and sunny, but dry, with low or no humidity. Temperatures surpass 100°F (38°C), on an average of 10-15 days during the summer. The Rogue Valley is in USDA plant hardiness zones 7-9. Sub-zero temperatures are extremely rare in the valley; the Rogue Valley International-Medford Airport has not recorded such extreme cold weather since December 21, 1990, when the temperature dropped to −2°F (−21°C).

Due to the valley's generally mild climate, it is used as a region to grow pears, and there are multiple vineyards. Medford has, on average, 175 sunny days per year, compared to 80 on average for the Willamette Valley, and 65 on average for the coast.

All content from Kiddle encyclopedia articles (including the article images and facts) can be freely used under Attribution-ShareAlike license, unless stated otherwise. Cite this article:
Rogue Valley Facts for Kids. Kiddle Encyclopedia.