The Southern Oregon Coast Range is the southernmost section of the Oregon Coast Range, in the Pacific Coast Ranges, located in the southwest portion of the state of Oregon, United States, roughly between the Umpqua River and the middle fork of the Coquille River, beyond which are the Klamath Mountains. To the east is the Umpqua Valley and to the west the Pacific Ocean. This approximately 55-mile (89 km)-long mountain range contains mountains as high as 3,547 feet (1,081 m) for Bone Mountain. The mountains are known locally in the Roseburg area as the Callahan Mountains, or simply as The Callahans.

As with the Oregon Coast Range as a whole, the Southern Oregon Coast Range likely began as an ocean island chain that collided with the continental tectonic plate of North America more than 60 million years ago. In the Southern Range the 64‑million-year-old Roseburg Volcanics that formed this section are the oldest portions of the entire range. The range is part of a forearc basin that has slowly rotated about 51 degrees since the Eocene period. Much of the mountain structures are pillow basalt formations created during the volcanic period and then uplifted with the collision into the North American Plate. Other geologic features are mainly the result of erosion and weather forces carving steam beds and valleys out of the rock formations. 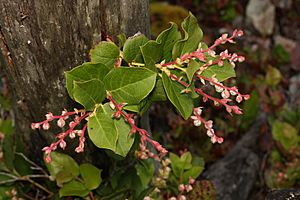 Plants include large stands of Douglas-fir trees, western hemlock forests, cedar trees, with portions of these forests including old-growth stands. Other flora include Sitka spruce, salmonberry, salal, tanoak, and western azalea. Portions of the range are in the Elliott State Forest.

The climate of the mountains is of the mild maritime variety. It is characterized by cool dry summers followed by mild and wet winters. Most precipitation falls in the form of rain, with snow during the winter months at the higher elevations. Annual precipitation varies from 60 to 120 inches (1,500 to 3,000 mm), with more in the higher elevations. The average high temperature in January is 36.3 °F (2.4 °C), and the average high in July is 61.9 °F (16.6 °C) with temperature also varying by elevation. 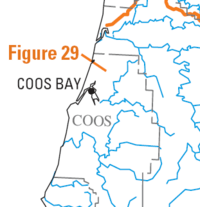 Map of the region with major rivers in blue. Orange line shows divide between watersheds flowing to the coast and those flowing north or east.

The following rivers have portions of their headwaters in the Southern Oregon Coast Range:

All content from Kiddle encyclopedia articles (including the article images and facts) can be freely used under Attribution-ShareAlike license, unless stated otherwise. Cite this article:
Southern Oregon Coast Range Facts for Kids. Kiddle Encyclopedia.