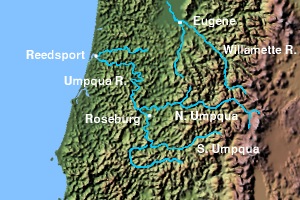 The Umpqua Valley AVA contains the drainage basin of the Umpqua River, excluding mountainous regions. It has a warmer climate than the Willamette Valley, but cooler than the Rogue Valley to the south. Grapes grown here include Pinot Noir, with smaller amounts of Pinot Gris, Cabernet Sauvignon, Chardonnay, and Riesling, as well as several French-American hybrids.

The Red Hill Douglas County, Oregon AVA is entirely contained within the Umpqua Valley AVA. This AVA includes 5,500 acres (2,226 ha), and is located near Yoncalla. Originally petitioned as the "Red Hill AVA", the proposed appellation brought protest from Willamette Valley vintners, where a region known as Red Hill is also located; the name of "Red Hill Douglas County" was instead chosen to avoid consumer confusion.

The Elkton AVA is entirely contained within the Umpqua Valley AVA. This AVA includes 74,900 acres (30,311 ha) and is located near Elkton. 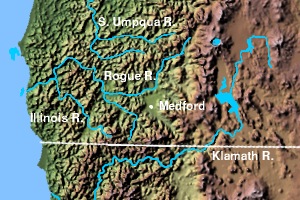 Rogue River and tributaries. The unlabeled stream to the east of the Illinois River is the Applegate River; Bear Creek is not shown on this map but flows through the valley in which Medford is located.

The Rogue Valley AVA includes the drainage basin of the Rogue River and several tributaries, including the Illinois River, the Applegate River, and Bear Creek. Most wineries in the region are found in the valleys formed by one of these three tributaries, rather than along the Rogue River itself. The region is 70 miles (110 km) wide by 60 miles (97 km) long (though much of the land within the AVA is not suitable for grape cultivation); there are fewer than 20 wineries with only 1,100 acres (4.5 km2) planted. Each river valley has a unique terroir, and grows different varieties of grapes. Overall, however, this region is the warmest and driest of Oregon's winegrowing regions.

The westernmost tributary is the Illinois River, which rises in southern Josephine County, in the Red Buttes Wilderness. The river flows generally northwest along the west side of the Klamath Mountains, past Cave Junction and Kerby then through the Siskiyou National Forest. It joins the Rogue River from the south on the Curry–Josephine county line, approximately 15 mi (24 km) from the Pacific Ocean. The region is marked by its high elevation and is significantly influenced by marine climates. The region is well suited for growing Burgundy varietals, similar to those grown in the Willamette Valley.

The Applegate Valley AVA, established in 2000, is the only sub-AVA in the Rogue Valley AVA. The Applegate River flows through the town of Applegate and near the city of Jacksonville, the location of Oregon's first winery (which has been restored and reopened as Valley View Winery). This region contains vineyards at altitudes ranging from 1,000 feet (300 m) to 1,500 feet (500 m) above sea level, and is warmer and drier than the Illinois Valley to the west, but less so than the Bear Creek Valley to the east. Grapes that thrive here include Merlot, Cabernet Sauvignon, Syrah, Chardonnay and Zinfandel, with Cabernet and Merlot being the dominant varietals.

Bear Creek is the most populated of the Rogue River tributaries, as it flows through the cities of Medford and Ashland. Here, the valley floor is 2,000 feet (610 m) above sea level, and the climate is warm and dry. The climate of the Bear Creek Valley is similar to that of Bordeaux, and it is well suited for cultivating varietals such as Cabernet Sauvignon, Merlot, Chardonnay, Cabernet Franc, Pinot gris, Sauvignon blanc, Malbec and Syrah.

All content from Kiddle encyclopedia articles (including the article images and facts) can be freely used under Attribution-ShareAlike license, unless stated otherwise. Cite this article:
Southern Oregon AVA Facts for Kids. Kiddle Encyclopedia.