The Willamette Valley AVA (/wᵻˈlæmᵻt/ wi-LAM-it), is an American Viticultural Area which lies in the Willamette Valley of Oregon. The AVA is the wine growing region which encompasses the drainage basin of the Willamette River. It stretches from the Columbia River in the north to just south of Eugene in the south, where the Willamette Valley ends; and from the Oregon Coast Range in the west to the Cascade Mountains in the east. At 5,360 square miles (13,900 km2), it is the largest AVA in the state, and contains most of the state's wineries; approximately 200 as of 2006.

Although this distinction is not officially recognized, many wine connoisseurs further divide the Willamette Valley into northern and southern regions, the dividing line being the approximate latitude of Salem (approximately 45° north latitude). 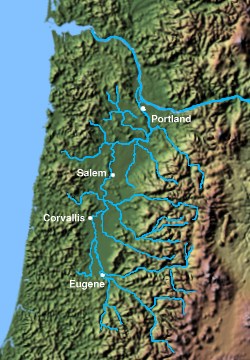 The climate of Willamette Valley is mild year-round. Winters are typically cool and wet, summers are dry and warm; heat above 90 °F (32 °C) only occurs 5 to 15 days per year, and the temperature drops below 0 °F (−18 °C) once every 25 years. Most rainfall occurs in the late autumn, winter, and early spring, when temperatures are the coldest. The valley gets relatively little snow (5 inches (13 cm) to 10 inches (25 cm)) per year. The hardiness zone is mostly 8b.

The Chehalem Mountains AVA, established in 2006, stretches 20 miles (32 km) from Wilsonville in the southeast to Forest Grove in the northwest. The Chehalem Mountains includes Ribbon Ridge, Parrett Mountain, and Bald Peak. The petition process for the creation of the AVA began in 2001 and was led by David Adelsheim of Adelsheim Vineyard.

The Dundee Hills AVA in the hills north and west of Dundee. The area is 6,940 acres (28.1 km²) in total size, with 1,300 acres (530 ha) planted with grapes. Over 25 wineries and independent vineyards in this region produce over 44,000 cases of wine. The area is particularly noted for its Pinot noir; several wineries in the AVA have won international recognition for their wines.

The Eola-Amity Hills AVA stretches from the town of Amity in the north to Salem in the south. The hills cover an area west of the Willamette River approximately 15 miles (24 km) long by 6 miles (10 km) wide. The Eola-Amity Hills area benefits from steady winds off the Pacific Ocean that reach the Willamette Valley through the Van Duzer corridor, a gap in the Oregon Coast Range, moderating the summer temperatures. The name Eola is a tribute to the windy conditions in the area, and is derived from Aeolus, the Greek god of wind.

The McMinnville AVA near McMinnville was established in 2005, in the hills to the southwest of McMinnville, roughly running from McMinnville to Sheridan. The AVA includes 14 wineries and 523 acres (2.1 km2) of vineyards, and includes lands with elevations ranging from 200 to 1,000 feet (300 m).

The Van Duzer Corridor AVA is located just west of the Eola-Amity Hills AVA covering approximately 59,871 acres. The Van Duzer wind AVA is known low elevations and gently rolling hills, cool breezes from the Pacific Ocean, and soils which are primarily uplifted marine sedimentary loams and silts with alluvial overlay. The AVA was established in 2019.

The Yamhill-Carlton District AVA in the area surrounding the towns of Yamhill and Carlton. Only grapes grown in vineyards with elevations ranging from 200 feet (100 m) to 1,000 feet (300 m) may be used to produce wines that bear the appellation name on their labels. The AVA includes over 1,200 acres (5 km2) of vineyard, and the region is in the rain shadow of the 3,500 feet (1,100 m) Oregon Coast Range, a short distance to the west. The AVA was established in 2005.

All content from Kiddle encyclopedia articles (including the article images and facts) can be freely used under Attribution-ShareAlike license, unless stated otherwise. Cite this article:
Willamette Valley AVA Facts for Kids. Kiddle Encyclopedia.