Phoenix is a city in Jackson County, Oregon, United States. The population was 4,538 at the 2010 census. Phoenix is a part of the Medford Metropolitan Statistical Area, in the Rogue Valley, and is 3 miles (5 km) southeast of Medford on Interstate 5.

The Phoenix area was settled in about 1850 by brothers Hiram and Samuel Colver. Samuel Colver laid out the town in 1854. Early residents included Milton Lindley, who operated a sawmill that provided timbers in 1855 for a blockhouse as well as a flouring mill owned by Sylvester M. Wait. For a time, the settlement was known locally as Gasburg after a talkative employee in the kitchen serving the mill hands. Wait, who was an agent for the Phoenix Insurance Company of Hartford, Connecticut, assigned the official name, Phoenix, to the community and, in 1857, to its post office. Waitsburg, Washington, was later named after Wait.

According to the United States Census Bureau, the city has a total area of 1.44 square miles (3.73 km2), all of it land.

The city is south of Medford and north of Talent and Ashland along Interstate 5 and Oregon Route 99. This is toward the southern end of the Rogue River Valley, near the Siskiyou Mountains and the border with California. 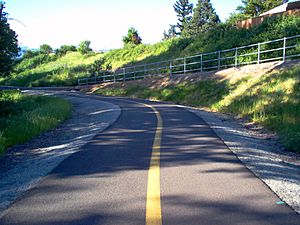 The Bear Creek Greenway in Phoenix.

This region experiences hot and dry summers, and cool and wet winters. According to the Köppen Climate Classification system, Phoenix has a hot-summer Mediterranean climate, abbreviated Csa on climate maps. 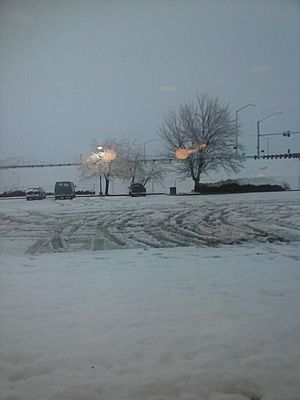 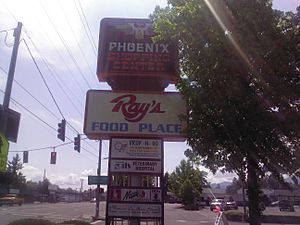 Phoenix is part of the Phoenix-Talent School District. The city is the site of two of the five schools in the district—Phoenix Elementary School and Phoenix High School, as well as Armadillo Technical Institute, a public charter school.

All content from Kiddle encyclopedia articles (including the article images and facts) can be freely used under Attribution-ShareAlike license, unless stated otherwise. Cite this article:
Phoenix, Oregon Facts for Kids. Kiddle Encyclopedia.