Lake County is a county in the south-central region of the U.S. state of Oregon. As of the 2010 census, the population was 7,895. Its county seat is Lakeview. The county is named for the many lakes found within its boundaries, including Lake Abert, Summer Lake, Hart Lake, and Goose Lake.

Its economy consists largely of agriculture and natural resource management and extraction.

Pre-Clovis era coprolites found in the Paisley Caves in northern Lake County in 2007 have been radiocarbon dated to 14,300 calendar years before present. DNA extracted from these human remains bears certain genetic markers found only in Native American populations. Luther Cressman found prehistoric artifacts in the Fort Rock Caves of northern Lake County in 1938, including basketry, stone tools, and a cache of woven sagebrush bark sandals which have been dated to more than 10,000 years ago.

European traders, explorers and military expeditions arrived in the region during the early part of the 19th century. Peter Skene Ogden led Hudson's Bay Company trappers to Goose Lake in 1827. In 1832, the Hudson Bay trappers under John Work were in the Goose Lake Valley and their journals mentioned Hunter's Hot Springs. Work's expedition visited Warner Lakes and Lake Abert and camped at Crooked Creek in the Chandler Park area. There they documented eating wild plums, which still grow in the area. They also reported being attacked by Indians. In 1838, Colonel J. J. Abert, a U.S. engineer, prepared a map that includes Warner Lakes and other natural features using information from the Hudson Bay trappers. In 1843, John C. Fremont led a party which named Christmas (Hart) Lake.

Lake County once hosted significant populations of Basque and Irish sheepherders. Disputes over grazing rights, exacerbated by the introduction of wheat farming, led to the eruption of range wars between cattle ranchers and sheep herders. At least one band of masked rifle-armed cattlemen killed sheep in the northern part of the county and in Deschutes County during the early 20th century and they came to be known as "sheepshooters". According to the Oregon History Project, 2,300 sheep were killed in a single night in April 1904 in Lake County.

Lake County grew with the arrival of homesteaders, but the dry climate made for challenging development.

Lake County was created from Jackson and Wasco Counties on October 24, 1874, by the State Legislature. It then included the present Klamath County and all of the present Lake County except Warner Valley. In 1882, land was assigned to create Klamath County, and in 1885 the Warner area from Grant County was added. Linkville, now Klamath Falls, was the first county seat.

M. Bullard gave 20 acres (80,000 m2) as the Lakeview townsite. By the 1875 election, a town had been started and an election moved the county seat to Lakeview. Because of poor transportation connections with the rest of Oregon, the early economic orientation of Lake County was toward California: both the San Francisco Chronicle and the San Francisco Examiner arrived in Lakeview daily, often before The Oregonian. During the 1840s and 1850s the county was part of the military courier route between The Dalles on the Columbia River and the Presidio in San Francisco.

The county acquired a railroad connection in the 1890s. That railroad spur, the Nevada–California–Oregon Railway line running from Lakeview to Reno, Nevada, emphasized the isolation of the county from the rest of Oregon. A devastating fire in 1900 destroyed much of Lakeview, including 75 businesses.

During the summer of 2012, two wildfires burned larges areas of Lake County. Both fires were the result of lightning strikes. The Lava Fire burned over 21,500 acres (87 km2) of public rangeland and scrub forest in and around lava beds north of Fort Rock. The Barry Point Fire burned 92,977 acres (376.26 km2) of public and private forest land along the California border.

Lake County ranges in elevation from 4,130 to 8,446 feet (1,259 to 2,574 m). The highest point in Lake County is Crane Mountain. The mountain is located 6 miles (9.7 km) north of the California border. Lake County has six other peaks with elevations above 8,000 feet (2,400 m), all located in the southern half of the county. Hager Mountain is the highest peak in the northern part of the county.

The area includes alkali lakes, high desert scrub, and forests of Western Juniper, Ponderosa Pine, and Lodgepole Pine in the hills and mountains. There are also several unusual geologic features and good areas for rockhounding and geological touring.

Lost Forest Research Natural Area is a protected relic forest closely associated with the Christmas Valley Sand Dunes in northeastern Lake County. Fossil Lake is an area nearby where many fossils of prehistoric animals have been identified. Glass Buttes is an obsidian complex in the extreme northeast corner of the county. Crack in the Ground, northeast of Christmas Valley is a long fissure with ice in its floor year round. Big Hole, Hole-in-the-Ground, and Fort Rock are ancient maar craters in the northwestern part of the county.

These twelve watersheds occur in whole or in part within Lake County: 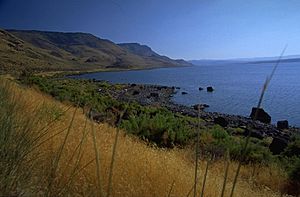 The East shore of Lake Abert.

Named lakes wholly or partly in Lake County include:

North Lake County includes many geological sites including the Fort Rock, a crater marked by wave activity in what was once an ice age lake bed, and the Fort Rock Homestead Village Museum. It's also a site where camel bones and Native American artifacts have been uncovered. The "world's oldest shoes" were found here in 1938, changing the dates range scientists believed that humans inhabited the far west from 4,000 years ago.

Several subsequent discoveries of even older sandals in the northern Great Basin confirmed the importance of archaeologist Luther Cressman's work. For this find, and for other research that broke down standing theories about the nature of the prehistoric Northwest, Cressman became known as the father of Oregon archaeology. Other sights in North Lake include the Lost Forest, Crack-in-the-ground, and Hole-in-the-ground

Oregon sunstones are found north of Plush. Sunstone is Oregon's state gemstone. Glass Buttes are high desert mountains in northeastern Lake County named for the large deposits of obsidian found on their slopes. This is a favorite collecting area for rockhounds.

All content from Kiddle encyclopedia articles (including the article images and facts) can be freely used under Attribution-ShareAlike license, unless stated otherwise. Cite this article:
Lake County, Oregon Facts for Kids. Kiddle Encyclopedia.