Pinus ponderosa grows in various erect forms from British Columbia southward and eastward through 16 western U.S. states and has been successfully introduced in temperate regions of Europe, and in New Zealand. It was first documented in modern science in 1826 in eastern Washington near present-day Spokane (of which it is the official city tree). On that occasion, David Douglas misidentified it as Pinus resinosa (red pine). In 1829, Douglas concluded that he had a new pine among his specimens and coined the name Pinus ponderosa for its heavy wood. In 1836, it was formally named and described by Charles Lawson, a Scottish nurseryman. It was adopted as the official state tree of Montana in 1949. 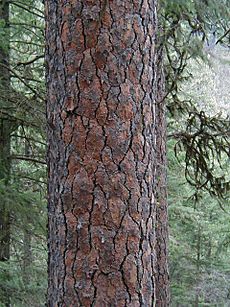 Pinus ponderosa is a large coniferous pine (evergreen) tree. The bark helps to distinguish it from other species. Mature to over-mature individuals have yellow to orange-red bark in broad to very broad plates with black crevices. Younger trees have blackish-brown bark, referred to as "blackjacks" by early loggers. Ponderosa pine's five subspecies, as classified by some botanists, can be identified by their characteristically bright-green needles (contrasting with blue-green needles that distinguish Jeffrey pine). The Pacific subspecies has the longest—19.8 cm (7.8 in)—and most flexible needles in plume-like fascicles of three. The Columbia ponderosa pine has long—12.0–20.5 cm (4.7–8.1 in)—and relatively flexible needles in fascicles of three. The Rocky Mountains subspecies has shorter—9.2–14.4 cm (3.6–5.7 in)—and stout needles growing in scopulate (bushy, tuft-like) fascicles of two or three. The southwestern subspecies has 11.2–19.8 cm (4.4–7.8 in), stout needles in fascicles of three (averaging 2.7–3.5 in (69–89 mm)). The central High Plains subspecies is characterized by the fewest needles (1.4 per whorl, on average); stout, upright branches at narrow angles from the trunk; and long green needles—14.8–17.9 cm (5.8–7.0 in)—extending farthest along the branch, resembling a fox tail. Needles are widest, stoutest, and fewest (averaging 2.2–2.8 in (56–71 mm)) for the species.

The National Register of Big Trees lists a ponderosa pine that is 235 ft (72 m) tall and 324 in (820 cm) in circumference. In January 2011, a Pacific ponderosa pine in the Rogue River–Siskiyou National Forest in Oregon was measured with a laser to be 268.35 ft (81.79 m) high. The measurement was performed by Michael Taylor and Mario Vaden, a professional arborist from Oregon. The tree was climbed on October 13, 2011, by Ascending The Giants (a tree-climbing company in Portland, Oregon) and directly measured with tape-line at 268.29 ft (81.77 m) high. This is the second tallest known pine after the sugar pine.

This species is grown as an ornamental plant in parks and large gardens.

Use in nuclear testing

During Operation Upshot–Knothole in 1953, a nuclear test was performed in which 145 ponderosa pines were cut down by the United States Forest Service and transported to Area 5 of the Nevada Test Site, where they were planted into the ground and exposed to a nuclear blast to see what the blast wave would do to a forest. The trees were partially burned and blown over. 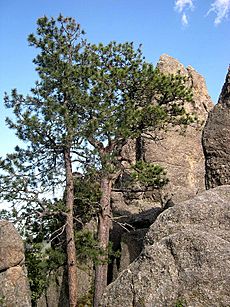 Pinus ponderosa is a dominant tree in the Kuchler plant association, the ponderosa shrub forest. Like most western pines, the ponderosa generally is associated with mountainous topography. However, it is found on banks of the Niobrara River in Nebraska. Scattered stands occur in the Willamette Valley of Oregon and in the Okanagan Valley and Puget Sound areas of Washington. Stands occur throughout low level valleys in British Columbia reaching as far north as the Thompson, Fraser and Columbia watersheds. In its Northern limits, it only grows below 1,300 m (4,200 ft) elevation, but is most common below 800 m (2,600 ft). Ponderosa covers 1 million acres (4,000 km2), or 80%, of the Black Hills of South Dakota. It is found on foothills and mid-height peaks of the northern, central, and southern Rocky Mountains, in the Cascade Range, in the Sierra Nevada, and in the maritime-influenced Coast Range. In Arizona, it predominates on the Mogollon Rim and is scattered on the Mogollon Plateau and on mid-height peaks in Arizona and New Mexico. Arizona pine (P. arizonica), found primarily in the mountains of extreme southwestern New Mexico, southeastern Arizona, and northern Mexico and sometimes classified as a variety of ponderosa pine, is presently recognized as a separate species.

The fire cycle for ponderosa pine is 5 to 10 years, in which a natural ignition sparks a low-intensity fire.

Pinus ponderosa needles are the only known food of the caterpillars of the gelechiid moth Chionodes retiniella. Blue stain fungus, Grosmannia clavigera, is introduced in sapwood of P. ponderosa from the galleries of all species in the genus Dendroctonus (mountain pine beetle), which has caused much damage. Western pine and other beetles can be found consuming the bark. The seeds are eaten by squirrels, chipmunks, quail, grouse, and Clark's nutcracker, while mule deer browse the seedlings.

Modern forestry research has identified five different taxa of P. ponderosa, with differing botanical characters and adaptations to different climatic conditions. Four of these have been termed "geographic races" in forestry literature. Some botanists historically treated some races as distinct species. In modern botanical usage, they best match the rank of subspecies and have been formally published.

Distributions of the subspecies in the United States are shown in shadow on the map. Distribution of ponderosa pine is from Critchfield and Little. The closely related five-needled Arizona pine (Pinus arizonica) extends southward into Mexico.

Before the distinctions between the North Plateau race and the Pacific race were fully documented, most botanists assumed that ponderosa pines in both areas were the same. When a botanist and a geneticist from California found in 1948 a distinct tree on Mt. Rose in western Nevada with some marked differences from the ponderosa pine they knew in California, they described it as a new species, Washoe pine Pinus washoensis. Subsequent research determined this to be one of the southernmost outliers of the typical North Plateau race of ponderosa pine. Its current classification is Pinus ponderosa var. washoensis.

The subspecies of P. ponderosa can be distinguished by measurements along several dimensions:

Names of taxa and transition zones are on the map.
Numbers in columns were derived from multiple measurements of samples taken from 10 (infrequently fewer) trees on a varying number of geographically dispersed plots.
Numbers in each cell show calculated mean ± standard error and number of plots.

Pinus ponderosa is the official state tree of Montana. In a 1908 poll to determine the state tree, Montana schoolchildren chose the tree over the Douglas fir, American larch, and cottonwood. However, the tree was not officially named the state tree until 1949.

In New Zealand, the ponderosa pine is considered a "wilding pine" due to the fact that it has been found to take over areas of land, causing the native species of plants to not be able to grow in those locations.

All content from Kiddle encyclopedia articles (including the article images and facts) can be freely used under Attribution-ShareAlike license, unless stated otherwise. Cite this article:
Pinus ponderosa Facts for Kids. Kiddle Encyclopedia.