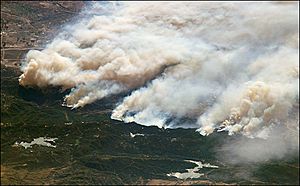 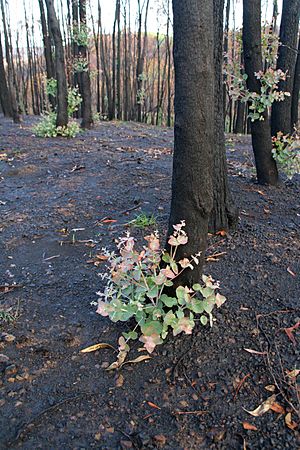 Regrowth of Eucalyptus trees, four months after a bushfire

Fire ecology is about the effects of fire on the ecosystems where it occurs. The results of fire are studied, and also what causes the fires.

If the fires are stopped, dry wood and dead plants accumulate. Bushes and trees that catch fire easily will start growing. When this area finally does catch fire, it will make the wildfire larger and more damaging, and be harder to control.

In the United States, campaigns have made people believe that wildfires are always bad for nature. This comes from the old belief that ecosystems grow towards a stable system, and disturbances like fires stop that, and destroy the harmony of nature. But we have since learned that in some areas, fire is needed to make the system work properly; fire also helps biodiversity of many habitats. The plants and animals in these habitats have adapted to protect themselves from fire, and sometimes must have fire to survive.

Still, fire can kill people or burn down buildings. Now, controlled burns are sometimes done to have fire where it is needed, but don't let it go where it can cause damage to people or their property.

A ponderosa pine stand in the Bitterroot National Forest in Montana in 1909, 1948, and 1989. The increase in vegetation density was attributed to fire prevention efforts since 1895.

All content from Kiddle encyclopedia articles (including the article images and facts) can be freely used under Attribution-ShareAlike license, unless stated otherwise. Cite this article:
Fire ecology Facts for Kids. Kiddle Encyclopedia.