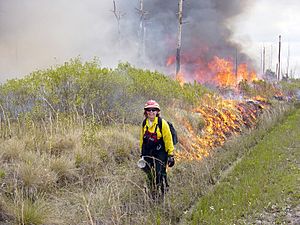 Using a drip torch to start a controlled burn (2005)

A controlled burn (sometimes also called a prescribed fire) is a fire that is started on purpose, and kept under control. It is done by people who are trained in controlling a fire, with the right equipment and the right weather conditions. It is done to help the environment or to make an area safer for people.

This is not the same as a practice fire, where a firefighter crew might start a fire in a house or other building that is going to be destroyed. They use it for practice, to learn how to enter a burning house safely and how to put out a house fire. Controlled burns, on the other hand, are done outdoors in forests or prairies.

There are several reasons why a controlled burn may take place. In some areas, there may be too much dry wood and dead plants. If a fire started there that was not controlled (like arson, an accident, or a lightning strike), that fire could become dangerous. So by having trained people there, and burning it carefully, then the fire won't be as hot and won't get out of control.

Another reason is to help nature. Some plants need fire so their seeds can start to grow, some animals prefer to live in places that have been recently burned, and sometimes it helps to get rid of weeds. Also, the ash on the ground is a quick fertilizer and helps return nutrients to the soil.

Sometimes it is done to help people. It can clear an area of brush and make it easier to see and move around. Hunter-gatherer people would do this to chase game into an area where they can kill the animal for food. This is becoming rare.

From the fire triangle, it is known that a fire needs fuel, oxygen and heat. To control a fire, removing one of these three things will cause the fire to go out. To keep the fire in the area it is supposed to be in, the fire can be smothered, removing oxygen. Or it can be sprayed with water, removing the heat. And the fire finishes when there is no more fuel.

Generally, the back fire is started first. This is the fire that burns into the wind, and moves slowly. This is a smaller, safer fire, and is easier to control. It can be started next to a trail or stream or other fire break that keeps the fire from moving downwind.

After the back fire is in place, then the head fire is started. It will burn downwind (travels with the wind). This will burn faster and hotter. When it reaches the back fire, there is no more fuel for the fire, and it dies out.

The list can depend on the group doing the burn, but often includes:

All content from Kiddle encyclopedia articles (including the article images and facts) can be freely used under Attribution-ShareAlike license, unless stated otherwise. Cite this article:
Controlled burn Facts for Kids. Kiddle Encyclopedia.